None, used it for importantly

On standby; Currently kept at the top of a tower in the Royal Palace
The Ultra Bell (ウルトラベル Urutora Beru) is a silver bell that when it rings it can make sound waves so powerful that they can hurt an Ultra Warrior.

The Ultra Bell was created during the Ultimate Wars and was used to defeat Alien Empera's army during or after his duel with Father of Ultra.

Its original and only appearance in the TV shows was in Ultraman Taro, when the Ultra Brothers had to use the bell's power to remove the dark clouds created by Mururoa that covered the Earth. When Taro arrived on the Land of Light, he and the other Ultra Brothers discovered that the tower containing the Ultra Bell was on fire. In order to brave the flames, Taro and his comrades fused, then the now-fused Super Ultraman Taro went to retrieve it. After the bell was used against Muruoa, the Bell was returned to the Land of Light and placed on standby in the case that it would ever be needed again.

Taro was sent to retrieve the Ultra Bell after the device was shrunk and stolen by Chaosroid T. Ultraman Fighting Evolution Rebirth 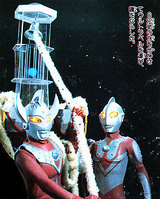 Add a photo to this gallery
Retrieved from "https://ultra.fandom.com/wiki/Ultra_Bell?oldid=522132"
Community content is available under CC-BY-SA unless otherwise noted.