Ultra Badge (ウルトラバッジ Urutora Bajji) is a transformation item that was used by Kotaro Higashi to transform into Ultraman Taro.

After Kotaro plants the monster Astromons, from a seed that was given to him by a captain of a ship that Kotora used to work on, he attacked the Kaiju, feeling it was his responsibility for releasing it upon the city, but the monster barely took notice of him and flew away with Kotaro hanging on to its foot. Soon after trying to fight the monster in the air, Kotaro was knocked off and fell into a soccer field. Kotaro is found unconscious the next morning by a group of children and women. after helping Kotaro get back to his strength one of the ladies gives Kotaro a good luck charm.

Later when Kotaro joins ZAT, he attacks Astromons once again, but this time in one of ZAT's fighter jets. But Astromons proved to be too much and threw Kotaro's plane into a building. Kotaro was then taken to the Land of Light, where he meets the Ultra Brothers and the Mother of Ultra who merge him with the newest Ultra Warrior: Ultraman Taro. The Mother of Ultra then tells Kotaro that she was the lady who gave him the good luck charm and that it was really the Ultra Badge. In the final episode, Kotaro gave the Ultra Badge back to the Lady In Green, separating from Ultraman Taro. However, not long after he separated from Taro, Alien Valky attacked Tokyo by surprise to get his revenge on Ultraman Taro, without knowing Kotaro had been separated from him. Kotaro fought him with his own human abilities and managed to defeat him by blowing up a nearby gas tank.

In Dororo Character Special, the Ultra Badge made a cameo appearance among the objects that messed in the Keroro Platoon's desk during their meeting. 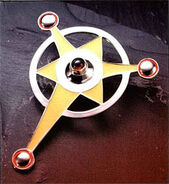 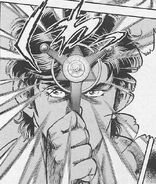 Kotaro holds the Ultra Badge for the last time

Kotaro gives the Ultra Badge back to The Lady in Green