Still in use
The Ultra Array (ウルトラアレイ Urutora Arei) is the dumbbell-like weapon that Father of Ultra uses. It was first used in Ultraman Ace episode 27. A multipurpose tool and weapon, the Ultra Array can be summoned by Father of Ultra from his belt buckle at any time, and has been shown to possess a vast number of uses, but is best known for its use as a blinding weapon, capable of stunning opponents with bright bursts of light.

The device came into Father of Ultra's possession sometime after the Great Ultra War and Belial's first attack on the Land of Light but before the start of Ultraman Ace's series. He is first seen using it when he temporarily blinds Alien Hipporit with the Array, sending him falling to the floor.

The Ultra Array is a weapon kept by Ken in his buckle when not in use. When used the object can produce an intense burst of light, blinding opponents and even damaging them.

In the Ultraman Story 0 manga, Father of Ultra used the device at the start of his time as an Ultra and also used it several times to completely destroy monsters with its light. 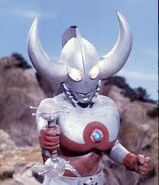 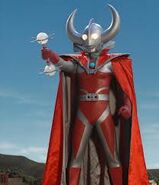 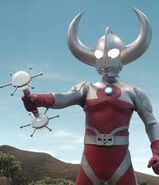 Father of Ultra preparing to use the Ultra Array on Jasyuline 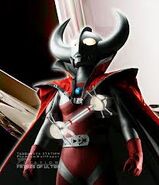