In use
Ultlance (ウルトランス Urutoransu)[2] are partially Ultlived monsters, using the Victory Lancer. However, only one of the monster's arms replaces the user's, and is known as a lance.

It first appeared in Ultraman Ginga S episode 2, when Victory stole the EX Red King Spark Doll and used Ultlance to fight Ginga with it.

This ability was used many times throughout the series, with many other Spark Dolls.

Victory uses them once again in this special against Aribunta in the fist battle, but Yapool analysed the ability and transferred it into Ace Killer's data, in order for it to become Victory Killer.

Varies, except for Ultraman Victory, who has no Ultlance

Same as Spark Dolls, but announces Ultra Egg at the beginning 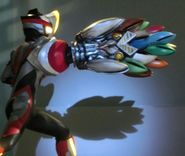 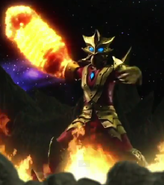