In use (Zero)
In use (X)
Ultimate Aegis (ウルティメイトイージス Urutimeito Ījisu) is a set of armor created by Ultraman Noa. Originally the Shield of Baradhi (バラージの盾 Barāji no Tate), it was converted into its current form and bestowed to Ultraman Zero out of everyone's hopes for resisting against Belial's forces.

Of course, the Ultimate Aegis is likely based on Noa Aegis, a pair of retractable wings used by Ultraman Noa to travel between dimensions. The armor's weight is 20,000 t.

The Shield of Baradhi was created by Ultraman Noa at some point of time, where it was placed into a statue of him underneath the Planet of Mirrors. A shard from the shield was craved, which took the form of the giant's energy core and picked by Hiro, whom would give to his son Nao.

When Nao's universe is under attack by Kaiser Belial's army, Run (Ultraman Zero), Nao and Emerana tried to search for the shield and after going through multiple obstacles, they manage to find it. Recognizing a missing piece, Nao placed his necklace (which was the carved part of the shield) on the shield but in a twisted turn, it crumbled to dust. Eventually, Nao knew what was the true purpose of the shield and after encouraging the remaining fleets that were resisting Belial's reign, Ultraman Noa visits Zero in his afterlife and revives him, granting him the true Shield of Baradhi, which transforms into the Ultimate Aegis. After Zero's battle with Belial is over, the Ultimate Aegis was kept inside the Ultimate Bracelet and utilized again by Zero whenever he needs to undergo inter-dimensional travel. Ultraman Zero The Movie: Super Deciding Fight! The Belial Galactic Empire

Using the data of Ultimate Zero, a Cyber Card would be manufactured by Xio Lab Team, which grants Ultraman X a new Cyber Armor in a form of Ultraman Zero Armor (ウルトラマンゼロアーマー Urutoraman Zero Āmā), a replica of the Ultimate Aegis. He first used it along with Ultimate Zero to travel to Planet Gilmo to rescue Rui after she was accidentally kidnapped by Alien Nackle Bandero. When the Aegis Shines

From the aftermath of the battle against Belial after the Crisis Impact, the Ultimate Aegis was heavily damaged while providing enough power to transport Zero back to the restored Earth. Salaryman ZeroAfter Belial's defeat, Zero's Ultimate Bracelet was fixed and thus allowing him to access the Ultimate Aegis. 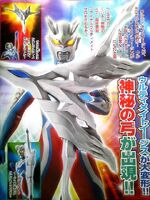 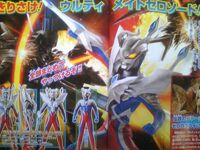 Zero using it as a Bow.

The Ultimate Aegis being charged by Zero and Dyna