The Trials of Ultraman
The USP (United Science Patrol) is a secret international organization founded to handle various alien and Kaiju-related incidents that may threaten the peace of Planet Earth. They are featured in The Rise of Ultraman.

The USP was founded decades ago through an international joint effort to create an organization dedicated to handling the Kaiju that had been appearing throughout Planet Earth. In the year 1954, the monster hunting group "Q" consisting of Satoru Ichinotani and Kyoko Kato had run into the Expédition Scientifique Nationale from France while chasing down Bemular. After it had escaped, they cut their losses then and decided to start an initiative to form what eventually became the USP, with Ureo Ichinotani becoming the current Director. The organization was once known as "Ultra Q" before being rebranded at some point.

One day in 1966, while Dan Moroboshi was flying in a USP VTOL, he was crashed into by Ultraseven, and Moroboshi was presumed dead. The wreckage from Seven's ship was reversed engineered into some of the technology that the USP used, including their cloaking technology and K-Ray weapon. The USP started Project Starlight, the deployment of a superweapon meant to shoot down Ultras' Travel Spheres, to prevent a repeat of the incident with Moroboshi. Doctor Yamamoto found out that, instead of destroying Kaiju, the K-Ray merely sent them to Limbo, an increasingly unstable dimension where the Kaiju would inevitably return from. Rather than dealing with the problem, the USP decided to fire and silence Yamamoto, forcing him into hiding. The USP continued the use of K-Rays for decades, with the intent of dealing with Kaiju quickly before the population found out about them and accelerate the Kaiju Crisis.

Eventually, Kiki Fuji and Shin Hayata were found by them after Shin built a Kaiju tracker, which was confiscated. Kiki was allowed to join the organization, though Shin failed their test. After the ordeal with Ultraman, Yamamoto's release, and Bemular's attack, the USP could no longer deny the public the existence of Kaiju, and planned to have controlled releases of Kaiju from Limbo around the world as a measure to prevent Limbo from destabilizing at a singular point, releasing all the Kaiju within. This plan was supported by Ultraman, who was prepared to help the USP fight against the Kaiju. At Shin's urging, the USP was planned to become a more transparent organization that the public could believe in during the emergence of Kaiju around the world.

After the USP revealed itself to the public, they were put under scrutiny and many conspiracy theories about them had begun circulating. The Joint Armed Disclosure Front, a hostile organization, formed to oppose them under the pretense that the USP were responsible for creating Kaiju.

The current Director of the USP.

A captain within the USP, he has a high rank and many years of experience.

Former pilot, presumed dead after Ultraseven crashed into his ship in the year 1966. He mysteriously returned in the present day.

One of the USP's newer recruits, and Shin's friend.

One of the specialists at the USP.

The human host of Ultraman. He was initially rejected from the USP because of his truthful attitude, but was allowed to join them some time after merging with Ultraman.

Current USP uniforms are dark blue and black in color, granting them some resemblance to the uniforms of the Night Raiders. Old USP uniforms were recolors of the Ultra Guard uniforms. After going public, the USP had their uniforms changed to ones that resemble SSSP uniforms. 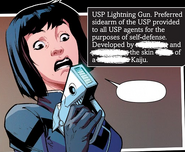 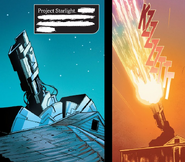 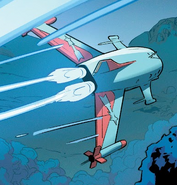