Protect the Earth from monster threats, protecting Victoriums from falling into Exceller's hand.

Ultraman X
UPG (Ultra Party Guardians) is a defense team under the International Defense Forces (国際防衛機構 Kokusai Bōei Kikō), whose main goal is to fight against monster threats and studying the Victorium crystals. They made their debut in Ultraman Ginga S.

UPG was formed two years after the defeat of Dark Lugiel. UPG was established due to a wide amount of rumors that were circulating about unnatural phenomenons in a place called Shimogaoka (雫が丘, Shimogaoka). UPG launched an investigation and discovered a stone called Victorium, unrealistic phenomenons and a giant monsters. Due to these recent discoveries, UPG decided to make massive preparations and to expand UPG to counter potential threats.

The UPG Live Base (UPGライブベース UPG Raibu Bēsu) is the UPG's main base of operations, which was modeled after SSSP's headquarters. The base play several roles in the story, used by UPG Captain Jinno to aid Ginga and Victory against Fire Golza and Gan-Q. Alien Chibull Exceller would later fused the base with Dark Lugiel's essence into Vict Lugiel.

Yoshiaki Jinno (陣野 義昭 Jinno Yoshiaki) is the 43-year old Captain of Defense Team UPG. He likes house plants and Herbal Tea, and cares for everyone in an emergency.

He is played by Ryuichi Ohura who previously portray Alien Angel Tori in Ultraman Mebius.

Hikaru Raido (礼堂ヒカル Raidō Hikaru) is the current host of Ultraman Ginga and the newest UPG member. Sent on a mission by UPG to search for Alien Chibull who had landed on Earth. While finding Alien Chibull Exceller, Hikaru discovers the ancient city of Victorium.

Tomoya Ichijouji (一条寺 友也 Ichijōji Tomoya) still uses the Gunpad which he used to control Jean-Nine two years prior. He is in charge of researching the Mysterious Stone "Victorium" in his "Ichijouji Lab". His research is sponsored by UPG. Among the other UPG members, he is the only one to know of Hikaru's secret as Ultraman Ginga.

Arisa Sugita (杉田 アリサ Sugita Arisa) (19 years old) is the only female member in UPG, and is the leader in Combat. She has the strength of a strong man and is in-charge of the Mechas of UPG.

She is played by Yukari Taki.

Gouki Matsumoto (松本 ゴウキ Matsumoto Gōki) (24 years old) is also in-charge of combat like Arisa. He has Black Belt in Karate, has trained his body, likes to laugh heartily and is surprisingly delicate. He apparently has loose lips when drunk.

He is played by Takahiro Katou.

Android One Zero (アンドロイド・ワンゼロ Andoroido Wan Zero) is the latest addition to UPG. After being cast out by Exceller for her failures to defeat Ginga and Victory, she is left wandering without a purpose, until she met Misuzu who showed her compassion and kindness, causing One Zero to re-examine humans in another light. Her nickname, given by Misuzu, is "Mana".

She is played by Moga Mogami.

Sho (ショウ, Sho), along with Sakuya, joined the UPG after the defeat of Vict Lugiel. He aided the team on various missions and continued to fight as Ultraman Victory. Even after joining the team, he still visits his step-brother, Repi.

Sakuya (サクヤ, Sakuya) is Sho's step-sister and joined the team with Sho after Vict Lugiel's defeat. She is quite capable on the battlefield and cares for her teammates. She occasionally visits her brother, Repi, on her day offs. 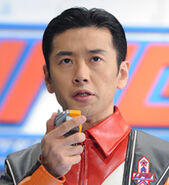 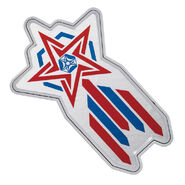 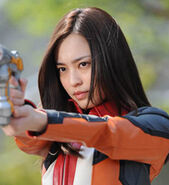 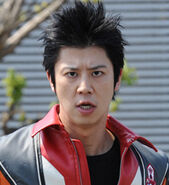 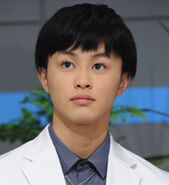 All UPG member with Sho and Kamushin

Some UPG members and Bolst