None
U-Tom (ユートム Yūtomu) were a race of ancient robots that appeared in episode 17 of Ultraseven.

The actual history behind the existence of U-Tom is unknown, except that they resided within an underground city. Above the underground city was a mining team who suffers from frequent signs of earthquakes every time during mining operations, followed by a flash of light. One day when Jiro Satsuma (Dan Moroboshi's human template) was trapped in a cave-in to save his mouse, the Ultra Guard were called to save him and brought along the Magmariser drilling tank. While crossing the volcanic cave, they found a metallic wall and Dan bombs it but gets kidnapped by a U-Tom. The team decided to get into the hole and discovered the underground city. Dan managed to escape from his captor before being burned to death by becoming Seven and rescue Jiro. The rest of the team returned to Magmariser as they escaped and their bombs detonated the underground city. 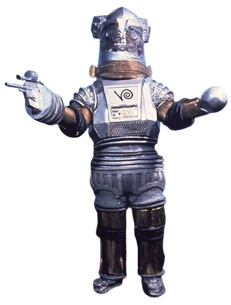 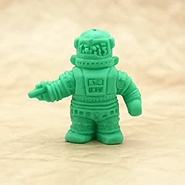 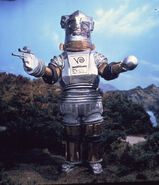