―Yapool, as U-Killersaurus, reveals to Mebius that he's been using Alien Nackle as a pawn

Twenty years later, the seal of U-Killersaurus become undone thanks to Alien Guts and Alien Nackle. Yapool revived as well, later U-Killersaurus killed Alien Nackle, which is supposedly their ally but Yapool revealed they are nothing than just pawns. The Terrible-Monster then proceeds to evolve into U-Killersaurus and overpowers the Ultra Brothers and Mebius. Until Taro and Zoffy arrival to restore the energies of the Ultras, they managed to fight on par with the Terrible-Monster by using their beams and slash attacks. When Mebius about to use his Mebium Shoot, Yapool shows that he kept Aya prisoner within U-Killersaurus's forehead in an unconscious state, and then blasted the latter with his Killer Eye Ray and holding Mebius on the ground with mandibles and prepares to use his ultimate attack on Mebius. Though suceeded in using his ultimate attack, the Ultra Brothers then fuses with Mebius and transforms into Mebius Infinity. U-Killersaurus Neo then crumbled to dust after Mebius Infinity uses his Cosmos Miracle Attack and dashing into his body and saving Aya.

U-Killersaurus returns as Plasma Killersaurus (プラズマキラーザウルス Purazuma Kirāzaurusu) in Mega Monster Rush Ultra Frontier VEROKRON Hunting. After defeating Plasma Verokron, the Rush Hunters returned to the Hunter Station while greeted by a cheering crowd. However they then witnessed the destruction of the planet they were fighting on, discovering that it was the home of Plasma Killersaurus. The titanic beast took of through the cosmos, spreading Plasma Soul around the cosmos and the appearance of more Plasma Monsters.

Baltan Battler・Barel, Guts Gunner・Garm, and Magma Master・Magna were secretly went to a planet filled with lava and a surface just like our Moon to find and hunt Plasma Killersaurus. Shortly after discovering it hiding, the monster woke up. The trio then ran to avoid chunks of fallen stalagmite until they stopped, discussing how Killersaurus came to this planet and how to get the monster's Plasma Souls. When the creature fully awoken, the trio endured a sandstorm, that was followed by the monster's roar and leaped high to dodge an attack. After dodging the creature's lightning bolt attack, the trio decided to attack it. Garm decided to fire his Gatling Shots at the behemoth, but it protected itself with an energy shield. Barel then launched his Lightning Boomerang at the creature, but it absorbed it into his body. Magna then summoned his Lightning Claw to attack, but the monster launched a plasma ring to knock him out of the air. He tried again, but this time, he saw a vision of a new sword before dodging another of Killersaurus's attacks. When the creature fired his lighting again, Magna deflected it, but at the price of his own weapon. Magna then retreated and was joined by the others. Killersaurus fired another lightning weapon at them, but this time, Garm countered it with his Gatling Gun. Unfortunately, he too lost his weapon afterwards. Magna then summoned his inner power and charged straight at the beast resulting in a small explosion. He may have been knocked back, but, he gained a new sword in the process. After a few moments of discussion, Magna summoned the power of the weapon, lighting it up and striking a major part of Killersaurus's Plasma Souls, and soon after, it left, but not without Magna losing his new sword. 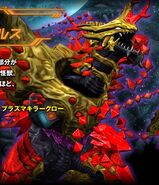 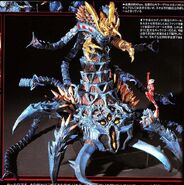 U-Killersaurus in a stage show 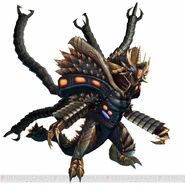