Ultraman Geed episode 9 "The Sword of an Oath"

Tyrant:
Tyrant (タイラント Tairanto) is a chimera-like Kaiju that debuted in Ultraman Taro, created from the spirits of the Ultra Brother's fallen foes. After fulfilling its vengeance on the previous Ultra Brothers, Tyrant arrived on Earth to fight Taro. Arguably the most popular chimeric monster in the Ultraman Series, numerous incarnations of Tyrant have appeared since the original's debut.

Tyrant was created by the combined spirits of several Kaiju that were defeated in the past by the Ultra Brothers. After leaving Neptune and heading towards Earth, Zoffy was the first to attempt to stop Tyrant only to be easily defeated by the chimera Kaiju's combined strength. From then on, Tyrant would face off against the other Ultra Brothers on the other planets that were to come after Neptune - Ultraman on Uranus, Seven on Saturn, Jack on Jupiter, and Ace on Mars, and like Zoffy they were all met by Tyrant's superior strength and were beaten down with ease by the behemoth all while ZAT was tracking the Kaiju's movements from their base.

Luckily, Ace was able to emit an Ultra Sign to warn ZAT and Taro of the coming Kaiju's presence. Finally Tyrant arrived in Japan and carried out its vengeance, wreaking havoc across the city. ZAT was quick to attack but was not enough to match Tyrant's strength. Kotaro turning into Ultraman Taro shortly after and the two fought. Whether it was from exhaustion from fighting the other Brothers, or Taro's natural strength, Tyrant was of little match for the hero and was destroyed after his grappling hook was energized and thrown back at him. Go Beyond the Ultra Brothers!

Tyrant reappeared in the movie The 6 Ultra Brothers vs. The Monster Army.

Awoken by a mad scientist's experiments in Thailand, Tyrant (as well as the Kaiju: Astromons, Dorobon, and Dustpan) went on a rampage until they faced Hanuman. Hanuman, having been recently revived following the end of his previous life as a human thanks to the efforts of the Ultra Brothers, was able to hold off Tyrant and his allies until Super Gomora appeared and attacked him as well. Hanuman was overpowered by the five monsters and encased in a crystal sphere by Gomora until the Ultra Brothers arrived to even the odds. Unlike the other Kaiju whom were killed in battle, Tyrant was killed when the scientist's facilities blew up, catching the Kaiju on fire before exploding.

Tyrant was Grande's first Kaiju to appear in the show, and the first he used to challenge Rei. Initially, Gomora and Tyrant were evenly matched, but Tyrant eventually overpowered Gomora with his superior size and strength. Gomora used his Super Oscillatory Wave against the chimera-like Kaiju, but it was absorbed into his chest mouth, leaving Tyrant unharmed. Rei recalled Gomora and summoned another of his Kaiju, Eleking. Even with the assistance of the ZAP SPACY, Eleking was no match for Tyrant. Tyrant eventually cut Eleking's throat with his axe hand, killing him and seriously wounding Rei in the process.

After Rei's recovery, and his Battlenizer had upgraded to the Neo Battlenizer (thanks to the assistance of his sister, Kate). Rei challenged Grande to a rematch with Gomora, and the duel was in Rei's favor. With the additional assistance from Litra slowing Tyrant down with its Fire Attack, Gomora defeated Tyrant by impaling him with his nasal horn and firing his Super Oscillatory Wave into his gorge, killing Grande's Kaiju.

Tyrant reappeared in the film Mega Monster Battle: Ultra Galaxy Legends The Movie as one of Ultraman Belial's 100 Monster Army. He was first seen rising out of the ground along with Hoe, Banpira, Gudon, Eleking, King Guesra, and Red King. He was then seen teaming up with Hoe, Vakishim, Sadola, Alien Reflect, and Galberos to take down Litra. Tyrant was recalled back by Belial along with the surviving monster to watch Reionic Burst Gomora fight the Ultras and was sent back out to fight Ultraman Zero. He was the last monster killed by Zero's Zero Slugger Attack in the final battle behind Alien Valky, Fire Golza, Alien Guts, King Joe Black, and Zetton, as well as the last monster to die in Belial's 100 Monster Army.

In Ultraman Saga, Tyrant is seen as one of the many Kaiju revived by Alien Bat via Hyper Zetton to battle against the Ultra Brothers, with Tyrant battling with Ultraman Leo. Tyrant fought with Leo for a short period of time, but was eventually killed by Leo's Leo Kick, blowing Tyrant to pieces.

Tyrant reappeared in season 2 of Ultra Zero Fight. Tyrant teams up with Villainous as the Fiendish Tag Team to fight Ultraman Zero. After all of the Ultimate Force Zero's members are killed, Zero Darkness (Ultraman Belial) invites Tyrant and the rest of the Darkness Five to conquer the universe. After Zero used his new Shining form to defeat Belial, Zero used the Shining Star Drive to emit a light too bright for the Darkness Five to handle forcing them all to retreat.

―Darklive announcement for the Spark Doll components of Tyrant via the Dark Dummy Spark.

Tyrant was Darklived by Alien Icarus on himself and the other Spark Dolls of the monsters that make up him. Tyrant then fought Ultraman Tiga and eventually Jean-Nine. He ended up in defeat by Ultraman Tiga kicking Tyrant's energized Baraba Whip right at him and Jean-Nine using Jean Stardust on him, blowing him up. All of the Spark Dolls ended up being turned back to their form of state and being recovered by Hikaru Raido. Ultraman Ginga Theater Special

Tyrant was referenced by Exceller to Vorst as the inspiration for Five King after watching Alien Icarus did so to himself.

A Cyber Card of Tyrant was created by Xio, Cyber Tyrant (サイバータイラント Saibā Tairanto) after his Spark Doll was salvaged by the team.

Tyrant reappeared in this miniseries where he was revived by Reibatos via combining seven monster souls from the Giga Battlenizer to deal with Ultraman Jack and Zoffy, who planned on stopping the chimera monster's new master at the Monster Graveyard. Zoffy and Jack fought against the beast as Reibatos left for a quieter location to revive his monsters.

Jack and Zoffy fought valiantly against Tyrant, but the injuries they had sustained in the fight were starting to bring them down. Ultraseven, Ultraman Zero, and Ultraman Orb, with his newly acquired Emerium Slugger form, arrived to aid their fellow Ultras in the battle, successfully regaining the upper hand. Due to their years of experience and know-how in combat, it didn't take long for Tyrant to be overpowered by the Ultras. After being weakened by Orb's Orb Kick and Zero's Ultra Zero Kick, Tyrant got destroyed once again by a combination of Ultraseven's Wide Shot, Zero's Wide Zero Shot, and Orb's Wide Slugger Shot.

Tyrant reappeared in episode 9 of the series where he attacked the underground base from above ground in search of Mayu's Little Star. He was then met with opposition by Riku Asakura, who transformed into Ultraman Geed to stop him. While Tyrant proved to be a tough opponent, Geed managed to hold his own against him by blocking his attacks, fighting back with own, and deflecting his Energy Ear Needle Darts.

Tyrant then breathed fire at Geed until Ultraman Zero appeared and dispelled the flames. The two Ultras then double-teamed the chimera Kaiju by kicking him simultaneously, dodging his ax swing, then grabbed him and threw him down. Tyrant then took on Zero alone as Geed went to take on Skull Gomora. Zero later transformed into his Beyond form and kicked away the Kaiju's grappling hook with his feet in midair. After dodging and blocking his flames, Zero merged the Quattro Sluggers into his Beyond Twin Edge and used them to slash at Tyrant multiple times and finally finished him off with his Wide Beyond Shot, destroying him as a result.

This is Tyrant's first form, gained when the vengeful spirit of many Kaiju fused together. Tyrant is a very powerful Kaiju, capable of defeating normal Ultras with ease. 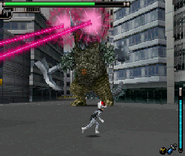 As EX Tyrant (ＥＸタイラント Ī Ekkusu Tairanto) or alternatively known as Remodeled Tyrant (改造タイラント Kaizō Tairanto), Tyrant retains most of his chimera-like body parts of separate Kaiju. However his body is more centaurian-like and he is twice the size of an actual Ultraman. His legs in this form are both Red King's and Gomora's legs separate as a whole to make up his centuarian body and he is given Geronimon's head feathers as a head piece. His left-handed Mace hand is now chain-linked that can be retracted and used as a ball-and-chain weapon (instead of the original, where it was a hook attached to a mace that can be fired like a harpoon. EX Tyrant can launch both his mace and hook at the same time (still clumped together) or individually launch the hook). His right-handed axe hand is also nearly quadrupled in size, almost matching EX Tyrant's own height.

Gained when the vengeful spirit of EX Tyrant refused to be defeated, Tyrant's body is modelled after his original appearance but now he is a giant skeleton of his former self. EX Tyrant (Deathborn) (ＥＸタイラント（デスボーン） Ī Ekkusu Tairanto (Desubōn)) A.K.A. Remodeled Tyrant II (改造タイラントII Kaizō Tairanto II) will keep reviving himself until he gets exposed to direct sunlight. Same as EX Tyrant, he was defeated by Ultraman Taro, after the two see the sun. Only appears in Ultraman Fighting Evolution Rebirth.

Tyrant Armor (タイラントアーマー Tairanto Āmā) is a Cyber Armor accessed by Cyber Tyrant's card. This form only appears in the stage show Ultraman Festival 2015, where it was stolen from Xio by Babarue to empower the real Tyrant with negative energies. Since this suit existed, its appearance in the series is yet to be made.

Belial Tyrant (ベリアルタイラント Beriaru Tairanto) is an enhanced version of Tyrant that appeared in Ultraman Live in Genting 2015. It was created by the Alien Baltans and is said to be invincible.[3]

He does however play a much bigger role in the story mode in Ultraman Fighting Evolution Rebirth. The first time he is seen, Tyrant was attacking a city until Ultraman Taro appeared to stop him and eventually Taro manages to defeat Tyrant once again. Later, Alien Mefilas and Alien Baltan are experimenting with several Kaiju on earth, transforming them into "EX Kaiju". Tyrant is one of the Kaiju who was transformed into EX Tyrant (EXタイラント EX Tairanto) and Ultraman Taro returns to face him again, this time on a comet. Ultraman Taro manages to defeat EX Tyrant, but the vengeful spirits that create Tyrant refuse to die so easily and Tyrant transforms into his skeletal form, EX Tyrant (Deathborn) (EXタイラント（デスボーン） EX Tairanto (Desubōn)). However in the end, Taro prevails and EX Tyrant II dies again after being defeated while the sun's rays shone on the comet.

Towards the end of the story mode, Alien Mefilas revives EX Tyrant in his first form to fight against Ultraman Cosmos to test his strength. Ultimately, Cosmos defeats EX Tyrant.

Tyrant is one of the monsters fought by the player in the Nintendo DS game Kaiju Busters. It is also the default and only monster that can be fought by two players via the game sharing function of one Kaiju Busters cartridge. 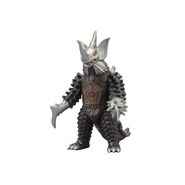 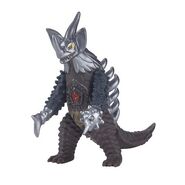 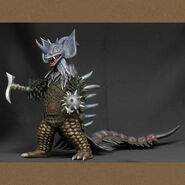 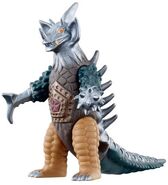 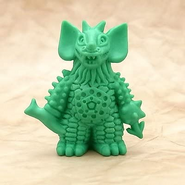