Tyrannosaurus Jackie (ティラノサウルスジャッキー Tiranosaurusu Jakkī) was one of the many huge dinosaurs that roamed Prehistoric Earth during Dinosaur Squadron Koseidon.

In a land where the laws of nature where killed or be killed, one dinosaur did it better than the rest. Living near a lake that was surrounded by skeletal remains of other saurians, a lone tyrannosaur with odd white markings on his body took on any challanger, willing or unwilling. Due to the beast's ruthless killing of other saurians, he earned the nick name, Tyrannosaurus Jackie. However, the king of dinosaurs was in for the fight of his life as a meteor crashed very close to him as he fought a lone triceratops. Roaring at the new challanger, and as the triceratops ran for his life. Tyrannosaurus Jackie was then controlled by Koseidon Corps and helped Koseidon against the Fear Beast Gaos, the living meteor! Jackie, having none of this while still breathing, instantly fought against the massive meteor beast, and almost to a stand still, but sadly, with one well placed heat beam, Tyrannosaurus Jackie lost the fight, and his life. 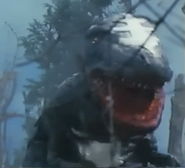