This may not be the article you are looking for. For the other versions, see Killer Dinosaurs and Tyrannosaurus Jackie.

Tyrannosaurus was an uncommon predatory dinosaur in the series, Dinosaur Squadron Koseidon.

A pair of Alien Godmes where walking around until a T-rex appeared. The dinosaur roared, and the two aliens started punching it with their guns. The dinosaur seemed to be in pain, and kicked the two aliens. Furious, the aliens shot the dinosaur, causing it to fall down. Toki Gou, a Koseidon Corps ranger, rescued the dinosaur, and killed the aliens. Later in the episode, the T-rex would prevent the Koseidon Corps' mecha vehicles from getting damaged by a land slide. It is unclear if this individual died after.

When the Godmes were causing the mass extinction, the T-rex was among one of the many saurians who fell to the oncoming event, being set ablaze by the intense heat. 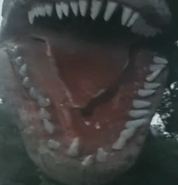 Peacefully co-existing in a research center

Running away from Alien Godmes with the other research center dinosaurs

The T-rex suit being burned.
Community content is available under CC-BY-SA unless otherwise noted.
Advertisement