TBA
Tyrako (チラコ Chirako) is a Styracosaurus that appeared in episode 4 of the Tsuburaya TV series Dinosaur Great War Izenborg.

After the death of Gorgo, Terrano and Stella, Tyrako was sent by Ururu to attack the city of Tokyo. The massive ceratopsian didn't take over the minds of animals like the other three, but went straight out destroying everything in sight. When the Izenborg flew into action, firing it's misses at the saurian, Tyrako retreated underground.

Later that day, the Allosaurus Arrow burst from the ground to attack humanity, spreading his poison smoke across the countryside, Tyrako joined the destruction. Soon, the Izenborg was called into action once again, and after a brief fight, Tyrako goaded Arrow to attack, while he dodged. This awarded Arrow with the loss of both arms, and still, the giant ceratops goaded the carnivore to keep attacking. Soon, though, the Izenborg plowed through the guts of both dinosaurs, causing them both to explode. 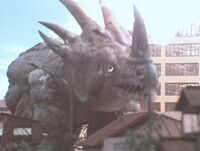 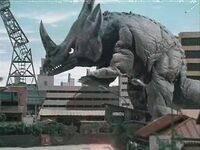 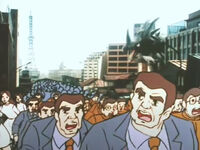 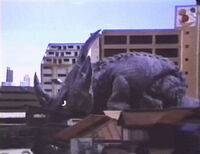 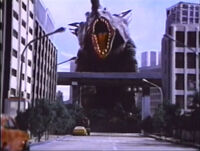 The Izen ship lunges into Tyrako's stomach, then making Tyrako him another Theropod solider explode into pieces.
Add a photo to this gallery
Retrieved from "https://ultra.fandom.com/wiki/Tyrako?oldid=537651"
Community content is available under CC-BY-SA unless otherwise noted.