A living fossil caught the eye of both the D-Force and the tyrant king, Ururu. They where killed in the battle, sadly, between the Super Izen I and Parasa. 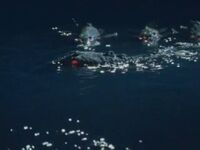 Add a photo to this gallery
Retrieved from "https://ultra.fandom.com/wiki/Tylosaurus?oldid=512439"
Community content is available under CC-BY-SA unless otherwise noted.