Twin Tail (ツインテール Tsuin Tēru) is a prehistoric Kaiju from the Return of Ultraman TV series. It first appeared in episodes 5 and 6.

When a ancient egg from the Jurassic period was dug up in a construction site, MAT was called to the scene to dispose of the egg but with no success, after one of the members shot it with a ray gun, he declared it an oddly shaped rock. As MAT left to deal with Gudon, the egg was buried again by the construction crew. Shortly after, the egg increased into near Kaiju size and erupted from underground in the middle of Tokyo. Soon enough, the egg hatched and revealed the monster Twin Tail, who began to rampage in the city. Go transformed into Ultraman Jack to confront the monster, and the two had a long and difficult fight. Suddenly Gudon emerged from underground, confronting Jack and his arch rival. Outnumbered and weakened, the two monsters were too much for Jack to handle, who had no choice but to retreat. With Jack out of the way, Twin Tail and Gudon viciously collided. The victor however was never solved as the two monsters separated for the time being.

After doing some research prior to Twin Tail's hatching, MAT soon discovered that Twin Tail was the instinctive rival of Gudon, which explained why Gudon had emerged in the first place. After viewing the damage caused by the monsters, the military threatened to unleash a "Spigun" to slay the two monsters. Knowing many innocent people would die and Tokyo will be destroyed if that happened, MAT decided to try one more attack on Twin Tail and Gudon, armed with nothing but bazookas loaded with paralyzing rockets. Twin Tail appeared first from beneath the Earth and MAT launched their first attack, aiming for the prehistoric beast's eyes and blowing out one of Twin Tail's eye before Gudon erupted from the ground. Ultraman Jack soon returned and subdued Twin Tail, allowing MAT to blow out the monster's other eye. This time when Gudon returned, Jack stepped back to allow Gudon and Twin Tail to fight it out. Twin Tail received fatal wounds by Gudon after being bitten into and being slammed to the ground, killing Twin Tail. Two Giant Monsters Attack Tokyo Battle! Monsters vs. MAT

Twin Tail reappeared in episodes 6 and 9 of the series, Ultraman Mebius.

Released into the sea by Bogarl from an egg. Drawn by the heat, GUYS eventually found the egg on the seafloor. Once they dove into the sea to find it, Bogal forced the egg to hatch and it released Twin Tail. Mirai quickly turned into Ultraman Mebius, but Twin Tail was too agile in the water, and was winning. But GUYS soon discovered Twin Tail's weakness: The two, glowing blue spots on its body where its sonar organs. They attacked it, which greatly injured the monster, giving Mebius the instant he needed to destroy Twin Tail with his Mebium Shoot. Two From the Deep Sea

Later on, another Twin Tail appeared and was seen fighting another Gudon. Their fight was halted by Bogarl, who beat both monsters into submission before eating them alive. Armor of Vengeance

Sometime later, GUYS was chosen to test out new arrivals of Maquette Monsters. One suggestion was Twin Tail, but was turned down due to his limited capabilities on land. Champion of the Fierce Fight

A Twin Tail appeared one night and ambushed Rei (after he had quit the ZAP SPACY after an argument). With Gomora in recovery this forced him to summon Litra to do battle. With the combined efforts of Litra and Rei's weapons, Twin Tail was quickly finished off by Rei's gunfire and Litra's fireballs.

Twin Tail reappeared in the movie Mega Monster Battle: Ultra Galaxy Legends The Movie as one of Ultraman Belial's 100 Monster Army. He teamed up with Gudon, Guesra, Antlar, Alien Baltan, Arigera, King Silvergon, Zetton, Gomess (S), Magular, and King Goldras to take on Ultraman. He attacked Ultraman with his whip arms but, Ultraman got a hold of them quickly, and gave a kick to Twin Tail's body, sending him flying. His fate is unknown afterwards (This most likely killed him as he is not seen after this).

He also participated in the Dark Spark War and was turned into a Spark Doll by Dark Lugiel.

He possibly restored to his original form and returned to his home universe after Ginga beats Dark Lugiel.

He teamed up with Gudon and Hyper Zetton despite being the natural prey of the former. They were quickly defeated by Zero due to the Ultra Warrior's strength and skill. After Zero and Orb defeated Hyper Zetton, Twin Tail caught Zero off guard by constricting his shoulders with his whips as well as biting him in the leg, although Zero managed to break free not too long afterwards.

Later, his old enemy, Ultraman Jack arrived to save Zero. Twin Tail joins forces with Gudon. However Twin Tail failed to hit Jack and after being thrown to the ground and being kicked is defeated by Jack's Ultra Lance. Ultra Fight Orb 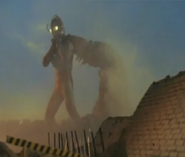 Twin Tail as a Spark Doll was seen in Ultraman Ginga. 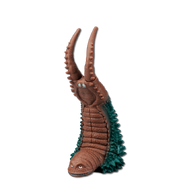 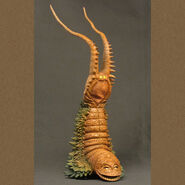 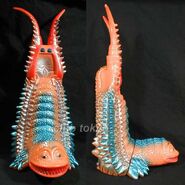 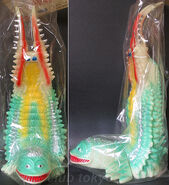 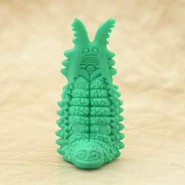