―Kondo's last words before passing on to the after-life.

None
Tsuchikera (ツチケラ Tsuchikera) is a Kaijin introduced in the Ultraman Gaia series in episode 39. He was originally a Pacific War scientist named Kondo (近藤, Kondo), who was injected with artificial bacteria and transformed into a monster.

Kondo was the single father of a little girl named Chie, and best friends with a man named Hirano. Both of the men were scientist in the days of the Pacific War, and along with Japan's Military Research Unit, they accidentally created an artificial bacteria. However Kondo was apposed to using the bacteria for any reason as its effects were irreversible, in which a group of soldiers raided the lab and took Kondo. So the Unit's superior officers had Kondo be the Unit's first test subject. After being injected, Kondo transformed into a monster and attacked the soldiers. He hid himself in the Ren Village swamp for years as his friend, Hirano brought his daughter, Chie, to play by the swamp every day, so Kondo could watch her grow from afar. Sadly, Chie died in an air-raid, leaving Kondo with nothing. However Hirano always return to visit Kondo, and would play a melody from a music box, which was a gift that Kondo was supposed to give to Chie to calm him.

In the present era, when the now old Hirano was about to be attacked by two thugs while he was playing his music box, Kondo, now known as Tsuchikera saved him by dragging one of the thugs to the lake and devouring him. Later, Gamu and two police officers were sent to investigate the swamp, searching for the previous thugs. Acknowledging both cops as hostile, Tsuchikera unleashed his tentacle to drag one of them to his death, but stopped after Hirano played his music box. XIG sent their research team to the lake to do further investigations. To make things worse, toxic wastes beneath the lake, which originated from the Ground Penetration Missile that was used to kill Tigris, began to increase, causing Tsuchikera to absorb all of it and grew into a mindless rampant. Ultraman Gaia appeared during the sunset and attacked Tsuchikera with all of his might. Remembering the monster was a human victim of an inhumane act, Gaia SV used his Gaia Healing to turn him into light particles, ending Tsuchikera's threat in a painless way. Before Tsuchikera disappeared, a normal Kondo reappeared in his spirit form to communicate with his old friend Hirano, thanking him for his dedication to him and his family. 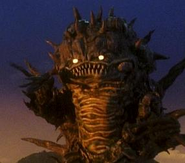