The large circular Plate on his chest, the "Miracle Signal", marks the limit of someone out of three Fighters or if all three are too weak to fight, by changing to the Fighter's personal color, the remaining time is 1 minute before the Three Fighters are forced to return to themselves, this is Triple Fighter's only weakness.

The evil Devil Monsters from Planet Devil wiped out the population of Planet M except for three siblings who escaped to Earth. They were Tetsuo/Green Fighter, Yuji/Red Fighter and Lily/Orange Fighter. Triple Fighter is formed when the 3 siblings merge together.

Triple-Double Kick
Add a photo to this gallery 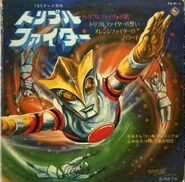 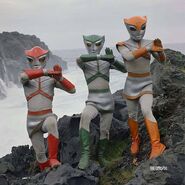 The three fighters and Triple Fighter 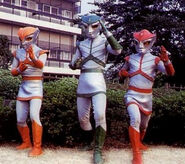 The human forms of the Three Fighters 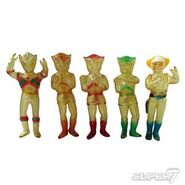 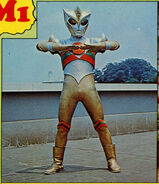 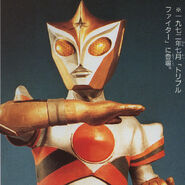 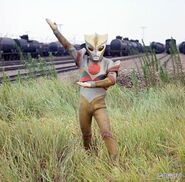 Triple Fighter helping other heroes lay 'dead suits' to rest.
Add a photo to this gallery

The Ultimate Force Zero and Triple Fighter as drawn by Masayuki Gotou.

The refined Triple Fighter.
Add a photo to this gallery
Retrieved from "https://ultra.fandom.com/wiki/Triple_Fighter_(character)?oldid=416788"
Community content is available under CC-BY-SA unless otherwise noted.