"It wasn't just three Giants of Darkness who fought Yuzare?! [...] That giant's name is... Trigger!"

Giants of Darkness
Carmeara (Former lover)
Ultraman Trigger (Other self)

Shoma Muto[3]
Trigger Dark (トリガーダーク Torigā Dāku)[4] is one of the Giants of Darkness that appears in Ultraman Trigger: New Generation Tiga. This was once Ultraman Trigger's original form before he turned to the light, and later became a separate entity in the present day.

In a similar manner to Tiga Dark, Trigger Dark is predominantly gunmetal grey in color, though he largely lacks any other colors in his design, with the exception of gold highlights on his ankles, thighs, around the top of his head and on the left side of his chest, next to his diamond-shaped Color Timer. Trigger Dark's armor is roughly textured, and he has two pointed extensions rising out of his shoulders. His shoulder pads and chest plate are asymmetrical.

Shoma Muto designed Trigger Dark, in addition to the rest of the Giants of Darkness. However, the artist denied having a hand in designing the dark Ultra's alternate face when accessing the Kaiju Keys.[6]

The original Trigger Dark was presented as a stoic and emotionally subdued individual, which heavily contrasts his teammates' sense of enjoyment in the battlefield. Despite being the target of Carmeara's affection, Trigger shows no signs of returning her feelings and only obeys her instructions without questions. The Encounter of Light and Darkness

During his resurrection in the present day, Trigger Dark is presented as a berserker who is driven to attack everything on sight, friend and foe alike, to the point of refusing assistance from his former friend Darrgon in against his heroic self. The 30-Million-Year Miracle Even after merging with Ignis, Trigger Dark refuses to give his host control over his body and feeds on the former's hatred against Hudram to empower his berserker tendencies even further.[2]

Trigger Dark was once one of the Giants of Darkness who destroyed the Ultra-Ancient Civilization, and was recorded on a hidden part the stone tablet. Wavering Heart He and the other Giants of Darkness captured Yuzare and took her to an altar to open the gate to the Eternity Core. Under Carmeara's instruction, Trigger Dark was the first of the Giants of Darkness to approach the object. Before he could do anything to it, Kengo Manaka, who had traveled back in time through a vortex, entered Trigger's Inner Space and attempted to convince him to turn to the light and fight for everyone's smiles. Instead, Trigger Dark attacked Kengo. The Encounter of Light and Darkness Eventually, Kengo managed to reach Trigger's heart, and found out that he and Trigger are one and the same. They became one and Trigger Dark turned from the darkness, becoming Ultraman Trigger Multi Type, who defeated the Giants of Darkness with help from Yuzare and the Eternity Core. He pushed his opponents into space while they turned into stone, with Trigger's own petrified remains landing on Mars and thus completing the time loop that started all these events.

In the present day, Trigger Dark frequently appeared within Kengo's recurrent dream, in which Yuzare gave the young man a cryptic message, before Trigger Dark would appear, shrouded in shadows. Connection of Light In one instance, Kengo dreamed himself into the Ultra-Ancient era, witnessing the Giants of Darkness destroying the ancient civilizations from Trigger Dark's perspective. For Smiles Trigger Dark returned in the present day when Carmeara performed her Curse of Darkness on Ultraman Trigger to remove his light, returning him to his original form. Trigger Dark went on a rampage, destroying everything around him until Kengo returned from the past and transformed into Ultraman Trigger, fighting against him and the other three Giants of Darkness. By this point, Trigger Dark has started to exist as a separate entity who was driven mad into attacking both friend and foe alike. Eventually, Trigger defeated his doppelganger with Eternity Zerades. The dark giant was reduced to dark essence which Ignis absorbed after the battle. The 30-Million-Year Miracle

Ignis, overhearing Ribut's advice to Kengo about unleashing his inner power, did so himself and turned the prototype GUTS Sparklence and a GUTS Hyper Key into the Black Sparklence and a Trigger Dark Key. He then used his new devices to transform into Trigger Dark. Operation Dragon However, he is unable to control the darkness and went on a rampage as a result, fighting against Ultraman Trigger. In his rampage, Ignis also used the powers of the Kaiju Keys he stole, but had run out of energy and disappeared. Their battle uncovered the Metsu-Orga egg lying around nearby.

Still eager for revenge against Hudram, Ignis confronted him and used Trigger Dark's powers once again, fighting against him and Ultraman Trigger, but was still unable to control Trigger Dark. Hudram took the chance to unleash Metsu-Orga on them and flee. Trigger Dark fought until he was defeated by Metsu-Orga's evolved form, Metsu-Orochi. Trigger Dark took control of Ignis once more when he heard the screams of people, reminding Ignis of his past and forcing him to transform. In a fierce battle against Trigger, Metsu-Orga and Carmeara, Trigger Dark took hold of the Circle Arms and attempted to strike Carmeara only to be shot out of the sky. Ignis was then detained by GUTS-Select and had his transformation items confiscated. Sneering Destruction

Trigger Dark returned after Akito gave Ignis back the Black Sparklence, since Kengo was trapped in Aboras' foam and the rest of GUTS-Select's firepower was failing. Akito made a few modifications to the Black Sparklence to prevent Trigger Dark from rampaging again, allowing Ignis to free Kengo using Banila's flames to clear the foam. Trigger Dark and Ultraman Trigger then teamed up to defeat the two monsters. However, after the battle, Ignis captured Yuna and disappeared. Demons Rampage Again

After managing to reach the Eternity Core, Ignis, using Trigger Dark's power, had one final battle against Hudram. They fought with Trigger Dark being at a disadvantage until Trigger brought Mecha Musashin's katana to Trigger Dark, allowing him to fight with Hudram evenly. Unable to accept that his friends' support made Ignis stronger, Hudram then targeted Akito, Yuna and Kengo for cheering Ignis on, who then shielded them and endured Hudram's attacks. Kengo then gave the Glitter Trigger Eternity Key to Trigger Dark, who blasted Hudram away. Despite having the chance to use the Eternity Core's power for himself, Ignis chose not to and turned away. He and GUTS-Select then parted ways on good terms. Last Game

When Carmeara used the energy of the Eternity Core to transform into Megalothor, Ignis transformed into Trigger Dark again to come to Trigger and GUTS-Select's rescue, aiding Trigger in fending off Megalothor long enough for GUTS-Select to escape. Together, the two Ultras seemingly defeated Megalothor, but Carmeara had survived, and began absorbing and releasing vast quantities of darkness to transform into Megalothor's second form. Aware that the darkness had the power to infect him and Trigger Dark, Ignis quickly reverted back to normal. Later, after Kengo revealed his identity as Trigger to the rest of GUTS-Select, he and Ignis transformed into Trigger and Trigger Dark once more to confront Carmeara for the final battle. The Ruler of Shadows However, their combined powers were not enough to defeat Megalothor now that it had evolved into its second form, and both Ultras were forced to retreat.

Soon, it was concluded that a power equal to Megalothor's was needed in order to defeat it, and that meant the mixing of light and dark energies which Trigger could achieve if Ignis gave Kengo the dark power back. Agreeing with the plan, Ignis gave Trigger Dark's power to Kengo to create the Trigger Truth Key, which allowed Kengo to transform into Trigger Truth, who fought Megalothor and defeated it with the help of GUTS-Select. After the battle was over, Trigger Dark's powers were returned to Ignis, who went off after the battle to search for another way to revive Lishuria. To the Ones Who Believe in Smiles / Pull the Trigger

Ignis converts the Black Sparklence into its Sparklence mode, loads it with the Trigger Dark GUTS Hyper Key, and by pulling the trigger with the device held skywards he transforms into Trigger Dark. 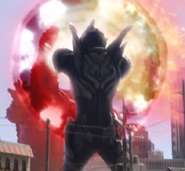 Ultra Hero Series Trigger Dark is a 13-cm soft vinyl figure that features 3 points of articulation on the arms and waist. Molded in primarily gunmetal PVC plastic, he features primarily bronze, black, and some yellow and two different shades of light blue paint.

Released exclusively for Bandai Namco's crane games, This redeco of the UHS Trigger Dark is molded in light gray PVC plastic with red sprays to represent his appearance in Kengo's nightmares.

As with most UAFs, Trigger Dark's rear paint operations are mostly omitted.

Released as part of the 2nd assortment for the CONVERGE MOTION Ultraman line, this Trigger Dark is an SD Figure.

S.H.Figuarts Trigger Dark is a 15-cm collectible action figure, featuring more than 18 points of articulation. Aside from his pairs of hands, Trigger Dark also comes with the Circle Arms accessory in its Multi Sword Mode, which can be wielded by either him (as a reference to Raging Feast) or the separately-sold SHF Ultraman Trigger Multi Type (complete with included hand part).

Trigger Dark is released as a Tamashii Webshop exclusive, and it can be ordered between ??? from 16:00JST until the ??? at 13:00JST, and the product will be shipped this June 2022. 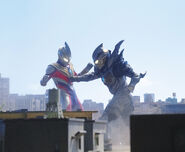