"Although we're born on different planets..."
"we all head to the same place!"
"We are...the Tri-Squad!"

"Although we're born on different planets..."
"we all head to the same place..."
"forever bonded together!"
"The four of us are...the Tri-Squad!"

―The Tri-Squad's reunion call with Hiroyuki

Good
The Tri-Squad (トライスクワッド Torai Sukuwaddo) is a trio of Ultramen with different origins who join forces to preserve peace in space. It was founded by Ultraman Taiga, along with Ultraman Titas and Ultraman Fuma.

At some point in time, presumably after completing his training, Taiga went off to defend a planet from alien invaders by himself, but was eventually overwhelmed. He was saved by Ultraman Mebius and Ultraman Hikari. Hikari lectured Taiga on his recklessness, and Mebius told him to talk to his father, since he sensed that Taiga was repressing certain feelings of his. Going back to the Land of Light, Taro entrusted Taiga with the Taiga Spark, advising him to form bonds with others and explore the worlds around him. Taro then told his son to go to Planet U40.

There, he met Ultraman Titas and Ultraman Joneus, who were being invaded by Zett and a new Zetton Army, seeking to fight strong warriors and defeat them all to become "the strongest life form in the universe". While Joneus fought Zett, he told Titas and Taiga to retrieve the Wise Man's Sword in order to seal Zett away. They individually attempted to do so, but the sword rejected the both of them since the "lights in their heart were weak". The two of them decided to pull the sword out of the stone together, and it worked because they were able to combine their powers. Impaling Zett with the sword, they managed to defeat him. Taiga invites Titas to go on a journey with him, though he was skeptical at first. However, Joneus managed to convince Titas to go along with him so that he may be able to learn something.

Some time later, they later went to Planet O-50. Ultraman Fuma was defending O-50 by himself from the Planet Invasion Union who wanted to destroy the Crusader's Peak to prevent it from creating more Ultra Warriors, but he was almost shot by a sniper. Taiga noticed it and took down the sniper before helping him against the other aliens, who escaped. Due to their hotheadedness, Taiga and Fuma argued when the latter said he could have done all the work by himself. Ultraman Orb then appeared and told Taiga and Titas not to think too bad of Fuma because he was actually a good person. After saving Fuma from aliens yet again, another argument broke out between Taiga and Fuma, and they started fighting. The aliens reappeared, taking the chance to finish them off while they were weakened. Titas lent the both of them some of his energy, and Orb joined the battle against them, managing to defeat the aliens. Fuma was still reluctant to team up with the two of them, until Orb advised him to go. Thus, the Tri-Squad was formed, and the two new members received their own Taiga Sparks as well. Ultra Heroes EXPO THE LIVE

At some time, they went to Planet Dino to fight against a robot army, and were almost sucked into a black hole. The Return of Titas

Once, the Tri-Squad visited the Remote Planet Rashuwa (辺境の惑星・ラシュア Henkyō no Wakusei Rashua) after fighting a few monsters together. Seeing the winter-like scenery the planet, along with the people living in peace, Taiga proposed that the Tri-Squad should help them celebrate Christmas, which he learned about from his father. Taiga and Titas took on human forms, but Fuma refused to join in because of his beliefs, stating that he had given up his human form for a reason. Taiga and Titas make presents and were about to deliver them, but were attacked by a hornworm-like Kaiju that emerged from the ground in their imago form. They were hesitant to transform and fight as the presents were likely to be destroyed, but they saved by Fuma. Two more of the Kaiju appeared, and they had no choice but to transform and fight. After the battle was over, they were surprised to see a bright light shining upon them, with a real 'Santa Claus' appearing. By the time they were leaving the planet, the three of them saw lights on the surface forming a giant Christmas tree. The Miracle of Christmas Night

The Tri-Squad left for Planet Chrono (惑星クロノ Wakusei Kurono) when the Godmes Army was attacking there. They assisted the Koseidon Corps in repelling them. Defeat Godmes

Twelve years ago, the newly formed Tri-Squad attempted to fight Ultraman Tregear after the other New Generation Heroes had been defeated. As a gift, the New Generation Heroes gave their light to the Tri-Squad. Taiga, Titas and Fuma ignored Taro's warning not to fight Tregear and attacked him. Despite being able to strike him a few times, their combined strength was not even close to enough to defeat him. Titas and Fuma were reduced to particles, which enrages Taiga. He charges ahead, but he also shared the same fate as his comrades.

One by one, the Tri-Squad descended to Earth and bonded with the human Hiroyuki Kudo. Taiga was the first to arrive on Earth, having floated around for years until he decided to save Hiroyuki's life after witnessing his bravery. Tregear

The light of Titas traveled to Earth along with the soul of the wife of the dead astronaut Rento Kujo, who was inside a Galactron MK2. Titas' light managed to reunite the couple, who finally passed away in peace after Rento gave up on his revenge. Titas then joined Taiga and Hiroyuki. Avenger of the Star

Fuma's light was bound to a crystal in a pendant, that had been traded around many times and somehow ended up in the possession of the Villain Guild, more specifically Volk. When the Darebolic (MB) was released, the building it was stored in collapsed in an explosion, injuring Volk, who decided to show the pendant over Homare Soya. Fuma's voice unexpectedly speaks to Taiga, and his light flies over to Hiroyuki, finally reuniting the Tri-Squad. Requiem of the Wolves

As a result of Taiga and Hiroyuki's constant use of the Kaiju Rings, this caused a massive headache to the two and severed from the Tri-Squad's bonds. Taiga would fell into the darkness as part of Tregear's plot against Taro and Hiroyuki was rescued from his headache by EGIS members. After a risky operation of entering Taiga's Color Timer, the young Ultra was rescued and therefore inducted Hiroyuki as a honorary member, allowing the formation of his new form, Tri-Strium.

The Tri-Squad would continue to fight against monster attacks and finally dealing against the planet eater Woola. Both Kana and Homare revealed themselves to have been aware of Hiroyuki's connection to the team as both EGIS and the Tri-Squad form an operation to feed Woola with energy. Following the success of the mission, the Tri-Squad were left on their own to fend themselves against Tregear and seemingly defeating him for good with Tri-Strium's Quattro Squad Blaster. In aftermath of the battle, the trio decided to remain on Earth while making themselves known to EGIS.

After spending their time on Earth, the Tri-Squad's original bodies were fully repaired, allowing them to separate from Hiroyuki when the time was right. They do so after defeating Grimdo but before they leave the Earth, Kana Sasaki reveals to them that she had EGIS ID tags made for them, making them honorary members of the team. Ultraman Taiga The Movie: New Generation Climax

The Tri-Squad were training on Planet Maijii, due to its optimal gravitational pull for muscle development, when Zett appeared before them. Taiga and Titas recounted their previous encounter with demon on Planet U40. The alternate version of Zett spawned an army of Zetton to take on the team. Taiga fought against the two normal Zettons, with his Hand Beam being no match for the Kaijus' defenses. With the three warriors struggling, they were aided by Andro Melos and Ultraman Ribut. Together, they managed to defeat the Zetton Army while Taiga went to face Zett, forcing him to retreat after firing the Aurum Strium at him. Receiving a message from Taro, they all went to the Land of Light to regroup, where Ribut briefed the three of them on the situation with Absolute Tartarus. Taro advised the Tri-Squad that they would soon have to help Zero on the front lines to deal with Tartarus, and Taiga went to train with his senior, Mebius. While looking for him, Taiga also met with Ultraman Z. Mebius and Taiga talked about the bond between Ultras, such as Seven, Leo and Zero's master and student relationship and compared it to their own with Taro, while watching Z practice.

Yullian and Ultraman 80 had crash landed on Planet Ebil on the way to a Galactic Federation Peace Conference on Planet Kanon and were soon attacked by Zett and his Zetton army. They sent a distress signal to the Land of Light. Responding to the message, Taiga, Mebius and Z immediately left the Land of Light and arrived on Planet Ebil to assist them. They were later joined by Ultraman Zero, Ultraman Joneus, Ultraman Titas, Ultraman Fuma, Ultrawoman Grigio, Ultraman Ribut and Andro Melos, and they all fought the Zetton army together. After fusing into Tri-Strium, Taiga handled Zett in place of 80 and Mebius, attacking him with a barrage of finishers while being helped by Ultraman Z, who fired the Zestium Beam at Zett just after Taiga had impaled him with the Taiga Blast Attack. In desperation, Zett treid to regenerate his Zetton army once more, but they were promptly finished off by Taiga Tri-Strium's new move, Rainbow Strium Burst.

Soon after defeating Ultimate Shining Zero in Narak, Absolute Tartarus appeared, taking Yullian hostage and informing the heroes of his true motives before getting Belial and Tregear to fire their beams at them all. The group also received word from Ultraman Hikari that Genegarg had stolen a Z Riser and Ultra Medals from the Land of Light, causing Z to fly off in a hurry while Zero followed him. The Ultra League and the Tri-Squad prepare to recruit more heroes for the upcoming fight against The Kingdom. The Appearance Ultra Galaxy Fight: The Destined Crossroad

The Tri-Squad after "destroying" Tregear

The Tri-Squad and Taro say goodbye to Hiroyuki and EGIS 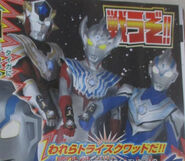 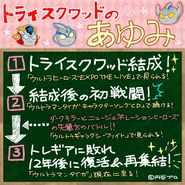 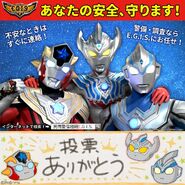 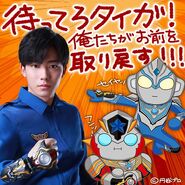 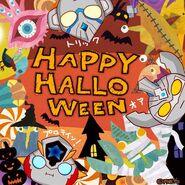 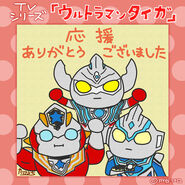 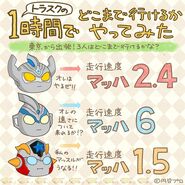 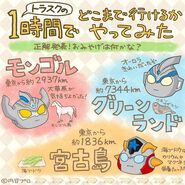