Inactive
Tregear Eye (トレギアアイ Toregia Ai) is a transformation device used by Ultraman Tregear's human form, Kirisaki. Its design when opened is based on the mask he wears, while its closed form resembles the restraint on Tregear's chest.

After going to Planet Borges and absorbing Grimdo, Tregear transformed into his current form by using this device. It is presumably destroyed along with him after he was killed by Ultraman Reiga.

Absolute Tartarus had somehow gained a Tregear Eye, storing it with the Giga Battlenizer in the Narak Dimension when he had returned to The Kingdom's Central Planet. Ultraman Belial and Ultraman Tregear saw Tartarus from behind a pillar, before they left to the Monster Graveyard to attack Geed and Taiga.

Back at the Kingdom after their battle on Planet Blizzard, both Belial and Tregear began to grow disillusioned with the paths they had taken. Desiring to find power his own way, Belial tore open Tartarus' storage and took the Giga Battlenizer while giving the Tregear Eye to Tregear. Ultra Galaxy Fight: The Destined Crossroad

Kirisaki presses the button at the top of the device to open it up, changing its design from Tregear's chest to his mask. He then places the device adjacent to his face and transforms into Tregear. 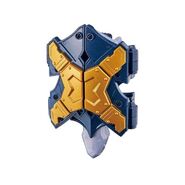