Tran (トラン Toran) is a fictional character from the Ultra Super Legends manga series. He is the son of the ancient Ultra Prometheus and later the adoptive son of Andro Flor's parents after Prometheus' death against Juda.

10,000 years ago, Tran was sucked up be a cosmic tornado that sent him to a different universe. With his lost memory, he was taken in by the parents of Andro Flor (both king and queen of the Andro Tribe). This made him the prince of the Andro Tribe.

As Tran's father fighting Juda, Prometheus intentionally caused a sword clash that created a black hole that killed him and sent the Cosmo Tector, Grantector and Andro Boat through it. This would eventually help his son battle against the coalescence of Juda's soul, Ido later in his life. This event eventually occurred and Tran came through the black hole Melos, Andro Wolf, Andro Mars and Andro Flor came through to battle the enemy. The three devices that his father had sent then combined to form a robot that assisted him in the battle. Tran was eventually successful and the Ido was defeated.

Soon, the Ultraman Taro of the Ultraman Story universe was transported to the World of the Land of Light via the same means Tran reached the Andro universe. As this happened, the Ido of the Guar killed by Andro Mars and Floru before Tran arrived and took the form of Juda to battle Tran and use the Earth's Life Energy, Az-Earth, to become the Earth's god. Tran battled the Juda clone for 12,000 years before both of them lost each other and Tran was left to wander alone in the vast reaches of the universe. 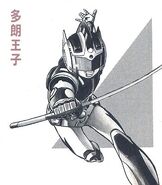 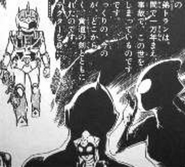