Town of Falling Stars (星の降る町 Hoshi no Furu Machi) is the first episode of Ultraman Ginga.

This all begins with a young man named Hikaru Raido when he unsuspectingly meets one of his old friends, Misuzu Isurugi, while saving her from a runaway cart. Misuzu takes Hikaru to a private school, when in actuality is the Ginga Shrine, which holds the Ginga Spark. Also he meets up with his other childhood friends Kenta Watarai and Chigusa Kuno. Later that evening, Hikaru goes to the shrine and finds the Ginga Spark. When upon grabbing it, it shines a large light which shows Hikaru a battle between the Ultramen from different universes and kaiju from different universes called the Dark Spark War. He sees a glimpse of a dark giant which is known as Dark Lugiel and his brief encounter with Ultraman Ginga. Hikaru also realizes that the Land of Light is real and meets Ultraman Taro in his Spark Doll form. The next day, Dark Lugiel sends Alien Valky to find people to use the Dark Dummy Sparks. As Taro is teaching Hikaru to use the Ginga Spark, Darambia appears as Thunder Darambia. Already in the form of Black King, Hikaru tries to fight back but is badly beaten, but when protecting Misuzu, Ginga's doll appears and Hikaru transforms into Ultraman Ginga. Now having the upperhand in the fight, Hikaru and Ginga start pushing back Thunder Darambia and finishes him with one of his special moves that send a powerful thunderbolt at the opponent: Ginga Thunderbolt. 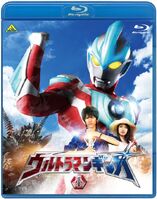