The☆Ultraman episode 5 "The Passenger! Break through the Underground"

None
Tough Gillan (タフギラン Tafu Giran) was a Kaiju that appeared in episode 5 of The☆Ultraman.

Then Tough Gillan meet with his mate that lived in the Japan Alps and this causes a disturbance to the people living around Gillan and Gillas so the Science Guard Party tried to drag away the mates away. TBA

Tough Gillan as seen in the episode 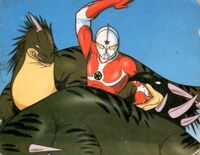 A Tough Gillan eraser
Community content is available under CC-BY-SA unless otherwise noted.