"The peace of the Earth is our responsibility, we the Science Patrol will protect it with our own hands."

―Captain Muramatsu to his team when they felt alone when Ultraman returned to space, "Farewell, Ultraman"

Akiji Kobayashi
Toshio Muramatsu ( Muramatsu Toshio) was the 36 year old leader of the bizarre incident investigation group known as the SSSP Japanese branch. He was called "Cap" (sometimes "Captain") by his subordinates. Before joining the SSSP, he belonged to the space experiment team of Anti-Space Defense Institute.

It was implied that he died 10 years prior to his team's reunion. His surviving colleagues went to his house to pay his respects. Ultraman speculated that Muramatsu was aware about Hayata's secret identity during the events of Ultraman.

Toshio is very serious and is also highly intelligent. He is a man of self-honest nature and is a good captain who watches over his subordinates, and is very appreciated by them. However, Toshio is capable of keeping a cool head and making tough decisions when under pressure. When Ultraman (actually an imposter) was committing destructive acts, Toshio issued a dispatch order against him, who he had up to that point thought of as an ally.

In addition, he is also shown to be cautious, when he was opposed to resorting to attacking the Alien Baltan during a counter meeting with Japan's other defense generals.

Muramatsu having a smoke 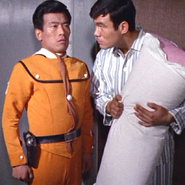 Muramatsu (right) in Ultraman THE FIRST