Toru and his sister Kaoru had been living with their father ever since their mother had died. One day while they went out of the Jonan Sports Center, Alien Tsuruk appeared and killed their father, leaving them orphaned. A MAC member Suzuki, a married man had hoped to foster the orphaned siblings until he was also murdered by the same alien. In the end, Momoko Yamaguchi, Gen’s lover took care of them where she acted as mother/older sister figure to them. He and Kaoru also befriended Gen as he was another trainer from the Jonan Sports Center and a MAC member. Gen even had gave them his pet, Ron whom originally was a space mole that he taken care of back on his home planet, L77.

In episode 40, while Toru, Kaoru, Momoko and Takeshi went shopping in a shopping complex, everyone was attacked by Silverbloome, whom proceeded to eat the whole building. Aftermath, only Toru was left among the survivors as his sister and friends were killed. At the same time, Gen also loses his friends from MAC from the very same monster. Fortunately, Izumi Miyama, his classmate offered him and Gen a refuge at her house. With MAC demised and no other attack team were left, both Toru and Gen had worked as a pair of investigators where they would investigate cases and incidents that mostly related to saucer monsters.

Near the end, when Alien Bunyo had captured Sakiko, Izumi’s mother so that Gen/Leo could surrender, he, Izumi and her family had learned the truth of Gen’s true identity. Nonetheless, they began to accept him as a human, making no difference. In Ultraman Leo’s final battle, Toru was held captive by Black Directive, the leader of the saucer monsters and demanded Leo to surrender over the boy’s life. As it seemed for the end of Leo and humanity, Gen’s students came and released Toru as they beat up Black Directive. Toru quickly took his crystal ball and throws it to Leo, as the Ultra used it to kill Black End. After the whole ordeal is over, Toru watched Gen for the final time before he leaves to an unknown destination. 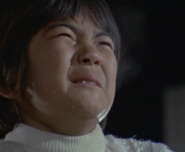