Torako (トラコ Torako) is the son of Torara from episode 8 of Dinosaur Great War Izenborg.

After Torara was destroyed by Izenborg's warship, Ranho flew down and gripped the egg with his talons and flew off into the clouds. Later, during the night, Ranho repeatedly pecked the egg, forcing it to hatch into Torako.

Ururu informed the youngster that his mother was killed, and this caused the hadrosaur to grow into his adult form, seeking revenge. It wasn't long before the Izenborg was once again called into action, but it turns out, like his mother, Torako couldn't really fight well at all. 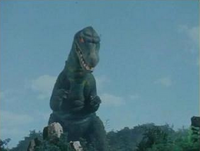 Add a photo to this gallery
Retrieved from "https://ultra.fandom.com/wiki/Torako?oldid=538488"
Community content is available under CC-BY-SA unless otherwise noted.