Having a huge grudge against Tokyo, the Phantom Militia sent their next robot, Tora-Girasu, to destroy the city again. Attacking with strange powers, the mechanical dinosaur was easily able wipe out the self-defense forces. When Goro transformed into Iron King, the red giant was quickly overpowered. The hero caught two of its rockets and were hoisted into the air. Now helpless, Iron King was blasted by immense firepower, causing him to quickly revert back to his human form. To make matters worse, as the robotic monster celebrated, the Phantom Militia kidnapped a young boy! With this battle won, the villains returned to their secret headquarters.

When the boy was rescued a few days later, the robot was sent out again. On the verge of nearly killing Gentaro, Goro soon transformed to save his friend in need. The dinosaur quickly launched its attacks, but the hero reversed its flash power and kicked a missile back at it, punting the explosive like a football! Heavily damaged, Tora-Girasu was helpless as Iron King threw its limp body aside, causing it to explode on impact. 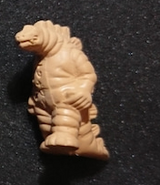