None
Tondaile (トンダイル Tondairu) was a Kaiju that appears in the TV series, Ultraman Taro.

An amphibious beast, Tondaile was often known by the locals of the area where it lives for eating people and is called "the Ghost Fire." One day when a kid named Jiro was banished from his house, he and his dad witnessed the beast eat a person walking nearby. Coincidentally, Kotaro was there monitoring the area and saw Tondaile. When Jiro and Kotaro told the rest of ZAT what happened they all laughed as the 2 described the beast as a ghost fire. The next day Jiro called the police after advice from a radio station and him,his father and a police officer tried to capture the beast. Then Tondaile arose and ate Jiro's neighbor. Jiro's father tried to fish it out but Tondaile then ate him terrorizing Jiro as the monster went back into the lake.

Later, it became morning and the police officer told ZAT that ghost fire was real. Now with authority evidence they decided to investigate. Then ZAT fished up a lot of possessions of the people that where eaten by Tondaile. ZAT then sends their underground tank, Lumida No.2 to find Tondaile underground. Kotato to chear up Jiro about his dead father decided to go in Lumida No. 2 to destroy the beast. Kitjama and Kotaro then arrive that Tondaile's cave only to see that the monster has thankfully not eaten the people only storing them until winter. The two then shot missiles at the beast waking it up. Then as the team prepares to shot a mega-missile Tondaile then emits flames from its mouth scaring the team away. Kotaro then suggests to bring the monster to the surface by poking the drill in the monster's back.

Then up above the lake, a earthquake is caused by Tondaile escaping so the vice captain sends Moriyama to shot the beast down with the Sky Whale. Tondaile then finally digs up to the surface emiting flames from the pain. Kotaro and Kitjama decide to reverse the engine as the monster has surfaced. This knocks Kitjama unconscious leaving Kotaro to deal with Tondaile. Jiro is then seen trying to stab the monster for trapping his dad only for Tondaile to shot flames forcing Jiro in a mountain. Moriyama and the rest distract the beast from killing Jiro by shooting it. Then after a couple words of Kotaro to Jiro Tondaile then throws the knife Jiro threw at him near them having Kotaro to deal with the monster once again. Kotaro throws the knife at Tondaile's eye, in pain the monster traps Kotaro in a orb making Kotaro transform into Ultraman Taro .

Tondiale takes a huge beating from Ultraman Taro but then Tondiale tires to trap Taro only for the Sky Whale to destroy the Capture Orbs. Then after a huge water fight Ultraman Taro drowns Tondiale and destroys him with the Strium Beam. Tondaile's food was laser recovered by Ultraman Taro having Jiro's father back with him. 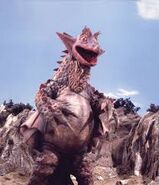 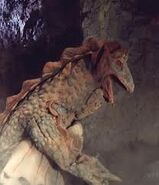 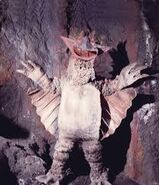 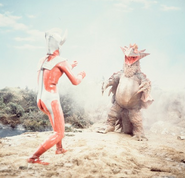 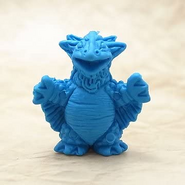