Takuya Kusakawa
Tomoya Ichijouji (一条寺 友也 Ichijōji Tomoya) is a young man who comes from a rich family, known as the Ichijouji Group. Though at first he opposed Hikaru, he finally accepted his friendship after having his own dream.

Tomoya was a rich man from the Ichijouji Group. He was also a student who had high achievements in sports and academics. For once, he told his father that he would follow his footsteps as an adult but only to be scolded. Tomoya first appeared in town sometime after Hikaru moved with his parents to London. He had apparently moved from place to place for unknown reasons. According to two of Hikaru's friends, he was a quiet and nonsocial person however, he did gave Hikaru a warm welcome when the two first met after bumping into each other while on his way from the Ginga Shrine. After noticing his possession of the Ginga Spark, he secretly watched Hikaru, as Thunder Darambia and Ultraman Ginga, fighting Kemur that same night. Tomoya simply smiled after watching Hikaru's victory.

Afterward, Tomoya was called to the school to help deal with a fire, when he arrived the fire was already put out and Hikaru appeared with a woman (King Pandon's Spark Doll User), only Tomoya noticed the Spark Doll in his hand. As the group talked he left silently.

Later when Ultraman Taro awoke, having recovered from his wounds, he found himself in a cage with Tomoya sitting in front of him. When asked who he was, he showed a Dark Dummy Spark and declared he was the owner of Jean Killer while revealed to be inside the robot itself.

As Jean-Killer, Tomoya made his first move when Hikaru/Ginga finally purified Ragon/Chigusa from the Dark Dummy Spark. He started his attack by brutally firing at Ginga while at the same time studying the Ultra's time limit of three minutes. Before Ginga reverted back to Hikaru, Jean-Killer retreated.

Later, Tomoya and Alien Valky decided to use the corrupted Kenta to destroy Hikaru. He first baited Hikaru with Taro into Jean Killer to make him believe Kenta was Jean Killer's host. However, when the plan failed, he challenged Hikaru to a fight where he used Doragory followed by Ultraman Ginga. When both of them were falling from space, Ginga reverted back into his Spark Doll form due to the time limit, leaving Hikaru falling until he was saved by Jean-Killer himself. Shocked by this, Dark Lugiel sent Tiga Dark to destroy both Hikaru and Tomoya, revealing Tomoya's secret to Hikaru.

When Tiga Dark unleashed his energy blast again, Taro quickly teleported the three of them to the school. All of Hikaru's friends were in disbelief that Tomoya was Jean-Killer. He revealed that he told his father that he would follow in his footsteps as an adult but only to be scolded. Taro approached Tomoya and revealed that he also had a similar experience as a child. Hikaru felt bad about him and decided to give him a dream: to defeat Ultraman Ginga. Tomoya agreed and summoned Jean-Killer while Hikaru transform into Ultraman Ginga and fought. He defeated the giant robot with relative ease by phasing his hand into the cockpit and crushed the Dark Dummy Spark with his own hand. Due to this, Tiga Dark appeared and eventually enlarged Alien Valky and the duo began to overpower the Ultra. Tomoya saw that his dream would be crushed and shed tears, causing the Gunpad to appear and Jean-Killer, now Jean-Nine, assisted Ginga with fighting the villains. After the battle, Ginga spoke for the first time about Jean-Nine's actions and Tomoya's conviction though he didn't answer Taro's questions. Tomoya leaves as he finally accepts Hikaru's friendship while reminding him that he will surpass Hikaru/Ginga.

In the second arc of the series, Tomoya started to assist Hikaru though mostly seen himself rather than Jean-Nine. After Dark Lugiel finally arose, Tomoya was rendered helpless due to Jean-Nine still on maintenance and Ginga easily defeated after his rise was interrupted. However, just when all seemed to be lost, multiple Ginga Light Sparks appeared in everyone's hands and Ultlived Taro, regained his full size and rose to challenge Dark Lugiel before channeling all of his energy to revive Ginga, resulting in Taro being defeated by Dark Lugiel. The villain was shocked to see Ginga revived again. The two then transform their Sparks into energy lances and took their battle to the moon, with Ginga winning. After Dark Lugiel was defeated, all of the Spark Dolls are presumed to have returned to their universe. A fully repaired Jean-Nine thanked Tomoya and departed with Ginga as he and all of his friends celebrated their victory.

Two years later, Tomoya joined the UPG after a global alert of countless monsters. He is in charge of researching the Mysterious Stone “Victorium” in his “Ichijouji Lab”. After Hikaru joined in too, he decided to secure Hikaru's secret as Ultraman Ginga from his teammates. Later, when Android One Zero raided the UPG Live Base, Arisa Sugita managed to knocked her and Tomoya successfully disarm the robot's Zetton Bomb via his Gunpad. In the final of the series' first half, he came up with a plan to use Shepherdon to revive Ginga and Victory after the duo Ultra killed by Five King.

When the whole UPG base was taken over by Kamiyama and his subordinates, Tomoya and other UPG members silently working on his conspiration for using the Victorium energies until their base and their main weapon fell at the hands of a revived Dark Lugiel and Alien Chibu Exceller. Tomoya, UPG members and Victorians helped defending human shelters from Dark Lugiel's minions. With the whole event was over, Tomoya used Android One Zero's Victorium charm that contained her imprints to rebuild her.

Tomoya Ichijouji in the opening

Tomoya got caught up by Alien Nakcle

Tomoya showing his Jean Nine Spark Doll and his Gunpad. 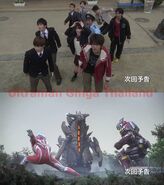 Tomoya with other UPG members, Shou and Kamushin