Tohl Narita (成田 亨 Narita Tōru) (3 September 1929 - 26 February 2002) was a sculptor and designer who worked for Tsuburaya Productions from 1965 to 1968. He is credited for designing many iconic kaiju in the Ultraman Series.

Narita was born in Kobe on 3 September 1929. His family relocated to Aomori Prefecture in 1930. He burnt his left hand from grabbing coal from the fireplace in his home prior to turning 1 year old. Surgeries failed to heal his hand. He studied in Hyogo Prefecture, where he was often bullied due to his injured hand. He could only paint with his right hand, but was determined to be a painter in the future.

In 1950, Narita entered Musashino Art School, where he majored on foreign painting and joined the sculpting department.

After graduating in 1954, he got a part time job in Toho and produced a miniature building prop to be destroyed by Godzilla.

In the spring of 1965, Narita became a contract employee of Tsuburaya Productions, and served as art director from the second course of special effects television film Ultra Q (1966). He then participated in Ultraman (1966), Ultraseven (1967) and Mighty Jack (1968), working concurrently the design of heroes, kaiju and mechanisms. He left Tsuburaya Productions in 1968, holding various exhibitions and designing characters in Totsugeki! Hyuman!! in 1972. 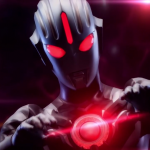