None
Todora (トドラ, Todora) is a walrus-like Kaiju from episode 27 of Ultra Q.

While heading back to Japan, Flight 206 suddenly disappeared into a gigantic cloud. The cloud was unlike anything else known to man and transported the jetliner to an alternate dimension. Dozens of missing planes littered the floor of this endless cloud. As panic gripped the group, Ippei and Jun managed to take control of the situation. Not long after, the titanic king of this dimension emerged from the plumes of white. Todora roared, ready to destroy those that had invaded its home.

As the group struggled to repair the damaged radio and plane, the walrus-like monster smashed its gigantic flippers onto some of the planes. Thankfully, they got the engines and radio working just as the behemoth got too close. Black smoke blasted the creature as the plane flew forward, gaining altitude and flying out of the whirlpool-like exit of the cloud. As the plane regained its normal course, Todora’s cloud began to close up and the monstrous walrus huddled back in its cloudy cave to lick its wounds and wait for other, easier prey. It is unknown if or when the cloud will return to swallow up more unsuspecting victims.

Todora was released as an X-plus figure but was very limited in numbers. Only 1,000 pieces of the X-plus Todora were released. There were also monochrome and red-eye versions of this figure. 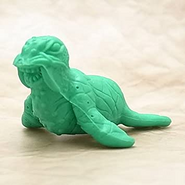 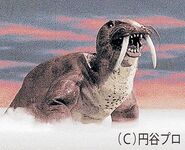 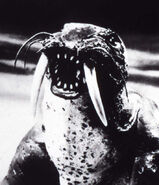 Todora and Goro being prepped in the shop.
Community content is available under CC-BY-SA unless otherwise noted.
Advertisement