Ultraman Gaia episode 51 "Earth is Ultraman's Star"
Tigris (ティグリス Tigurisu) are a species of Kaiju that appeared in Ultraman Gaia. Tigris is one of the Kaiju that fought Zog.

The word "Tigris" is Greek for Tiger.

Long ago two monsters, Tigris and Mizunoeno Dragon ruled the Earth, which the dragon controlled the water and the tiger took the land and slumbered underground. Many years later, a disgruntled member of GUARD seeking revenge for his men in Zonnel II's attack, launched a highly explosive bomb underground, seeking to destroy the hibernating Tigris. When the bomb went off, Tigris surfaced. It was soon clear that he was badly damaged as he was spewing blood, slowly making it's way towards the base that launched the bomb. Despite this, Gamu still transformed into Ultraman Gaia and attempted to fight Tigris. However, he couldn't bring himself to fight the dying monster and any attempt to guide it somewhere else failed. GUARD, however, kept launching missiles on Tigris, much to the horror and pleads of the people who watched. Tigris eventually succumbed to his injuries and died, in which Hiroya tells Gaia to take the monster back underground, so that he may rest in peace.

Months later, the monster Blitz Blots attacked the Earth and out of the ground came a second Tigris, reborn from the first and he fought the invader with the help of XIG fighters. Blitz Bots managed to overwhelm Tigris which then Ultraman Gaia came to fight the alien. After Blitz Bots was defeated, Tigris, who was injured greatly in the fighting, died, just like his predecessor, with his death being honored by XIG members later on. The Living Planet

Later on, the Dobishi assaulted Earth and a third Tigris rose again, reborn and ready to fight the alien insects along with other monsters. But with the attacks a Kaiser Dobishi came down to fight Tigris. Sadly like the many Tigris before him, the insect unleashed thousands of Dobishi's on him. In agony, he falls over the side dead, like Geel III. The Cry of the Earth Earth is Ultraman's Star 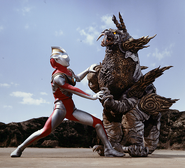