None
Tiga's companions are a pair of Ultra Warriors who once accompanied Ultraman Tiga after his defection from the Dark Giants.

After Tiga turned to the light, he fought along side two companions against enemies. However, they were restricted from interfering with human decisions when some of them picked Gijera over the Ultras. After their duty was done, they were laid to rest inside a giant pyramid until the Earth needed them again, predicting the incoming calamity induced by the great destroyer. Their light essence departed for their home, leaving behind their bodies as statues.

30 million years later, both of these statues were destroyed by the newly awakened Golza and Melba while Tiga's remained intact. Daigo Madoka fused with the statue of Ultraman Tiga, bringing him back to life. With his comrades' statues destroyed, Tiga became the final member of their team left to protect the Earth until his final mission, saving humanity from the great destroyer.

These Ultras appear in a non-canon manga drawn by Tony Wong and published by Dark Horse Comics. They are first seen helping Tiga save the ancient civilization from a deluge of monsters.

In modern times they were with Tiga in a strange dimension when Daigo was rescued from his plane crash. After Daigo merged with the Tiga statue, it was the two of them who bestowed on him the knowledge of Type Change.

The three statues from the first episode is immortalized as PVC figures, released as part of the 2nd Tiga Monster Ultimate Collection set.

Released as part of the titular Chodo set, the statues are once again released as non-articulated figurines. In addition, they also feature a separation gimmick on each body, which allows it to recreate the destruction of the statues caused by the included Melba and Golza. 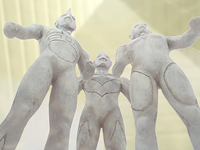 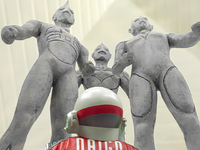 Daigo looks at them 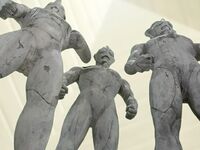 The whole team in the Tiga Pyramid. 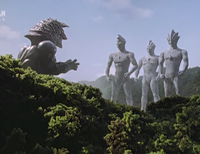 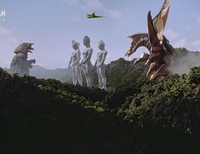 Their last moment before being destroyed 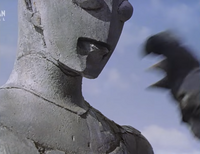 A companion's statue before being destroyed 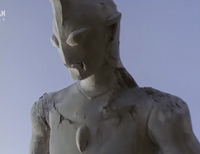 His statue before falling down and shatters 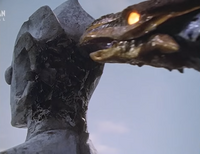 The other companion's statue before being destroyed 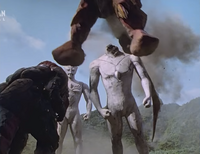 His statue being beheaded

Tiga's companions in Ultraman Tiga Gaiden: Revival of the Ancient Giant
Add a photo to this gallery

Tiga's companions as seen in the comic

Tiga and his companions arrive on Earth in the manga

Retrieved from "https://ultra.fandom.com/wiki/Tiga%27s_companions?oldid=524623"
Community content is available under CC-BY-SA unless otherwise noted.