Thunder Killer (サンダーキラー Sandā Kirā) is a Kaiju from Ultraman Geed. This monster is made by combining Ace Killer and Eleking.

Thunder Killer first appeared at the end of episode 5 of Ultraman Geed where he was formed when Kei Fukuide used his Riser to turn into this monster via the Kaiju Capsules of Eleking and Ace Killer. The monster spent his time rampaging throughout the city and destroying property with his Light Blades, was met with opposition by Ultraman Geed, and the two of them immediately charged at each other.

As the two giants raged on, they were initially evenly matched, but Geed hurt his hands after he tried to hit Thunder Killer on the head, leading to the latter to strike at the former hard with his electrified talons. Afterwards, Geed transformed into his Solid Burning form in hopes of turning the tide in his favor, and he did so by attaching the Geed Slugger to his arm after Thunder Killer deflected his Psychic Slugger, but when Geed fired his Strike Boost, Thunder Killer absorbed the attack and fired it right back at him. Just when things were looking bad for Geed, Ultraman Zero appeared to give him a helping hand, only for the fusion Kaiju to vanish.

Eventually, Thunder Killer returned in Area J of Unno and so did Geed who showed up for a rematch. Their rematch started after the fusion Kaiju taunted the Ultra, which proved to be a big mistake for the former as the latter learned from their last fight and held the upper hand over Thunder Killer via combat until the Kaiju fought back and landed a reversed Thunder Discharge on him, knocking him down, and making his Color Timer go off. Riku Asakura then remembered some inspiring words said by Leito Igaguri about fate and caring about others, got back up, and for the first time, summoned his Geed Claw. With it, he landed a Claw Cutting attack on Thunder Killer then transformed into his Acro Smasher form as he dodged and deflected Light Blades with relative ease. After getting in four devastating slashes on the fusion kaiju, Geed destroyed him with his Diffusion Shower.

That wasn't the last of Thunder Killer, however. After Zaigorg defeated Dada and his personalized Legionoid, Kei used his Kaiju Capsules and Riser to transform into Thunder Killer once again. The two of them soon faced off against Geed again and throughout the fight, Geed managed to hold his own against the two Kaiju with his experience, skill, and athleticism at first, even though they outnumbered him. However, the two of them ganged up on Geed and held on him on the ropes with their teamwork. In order to stack up to their levels, Geed transformed into his Royal-Mega Master form.

While he was in this form, Geed was able to hold both Kaiju at bay with his sword while swiftly and majestically dodging their attacks. After defeating Zaigorg, Geed turned his attention towards the chimera Kaiju and once again managed to overpower Thunder Killer with his new form while the two hosts were having a brief conversation. While Thunder Killer launched an incredible lightning attack from his chest, Geed responded by using his cape as a means of defense. He then utilized Ultraman Taro's Ultra Capsule into his King Sword and defeated Thunder Killer once and for all with his Strium Flasher.

A Celebro-possessed Shinya Kaburagi transformed into Thunder Killer, as well as Skull Gomora and Pedanium Zetton, after managing to forge the Belial Medal by using Riku's genetic data. Ultraman Z and Ultraman Geed faced the Belial Fusion Monsters, but were having difficulties due to Celebro's form changing. Suddenly, Ultraman Zero appeared, and the three of them managed to turn the tide on Celebro and defeated him with a combination of the Zestium Beam, Wide Zero Shot and Wrecking Phoenix. His Majesty's Medal

"Eleking! Ace Killer! This is the end mark."

After scanning both capsules, Kei presses the trigger of the Riser and transforms into "Ultraman Belial". As the background changes into an eclipse, Kaiju Capsules of Eleking and Ace Killer appear briefly before "Belial" inhales them, morphing into and creating Thunder Killer.

"Eleking! Ace Killer! This marks the end for you!"

Kei activates the Eleking and Ace Killer capsules, then loads them into the Riser as usual. However, Kei is not shown to transform into "Belial". Instead, Kei transforms in a burst of bright light after activating the Riser. 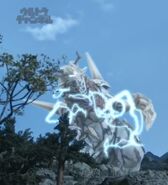 Shinya sets his Ultra Access Card into the Z Riser and then places three Kaiju Medals in the slots before sliding the blade and pressing on the trigger.