Thunder Arrow is an evil Ultra being who appeared in the manga Ultra Brothers Story: Ultraman 80 Chapter.

Thunder Arrow was an evil Ultra Warrior who was exiled from the Ultra home world 50,000 years ago. He sought revenge against the Ultra Warriors utilizing his monster corps. During his battles with the Ultra Brothers, he killed Mother of Ultra, Ultraseven, and many other Ultras with his powerful beams. He was eventually killed through the combined power of Zoffy and Ultraman 80. 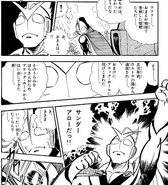 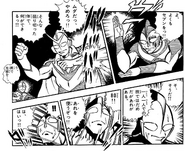