Jun and Yuriko travel to the island of Iwanejima to investigate undersea volcanic activity. A young marine geologist, Dr. Ishii, has theorized that the entire island may soon be in danger of submerging beneath the sea. Ishii's theories, however, are met with indifference by the island's population, which relies on the local fishing trade to exist. When a mysterious object is retrived by one of the fishing boats, a strange humaniod sea creature called Ragon comes ashore and terrorizes the village at night. Dr. Ishii wonders if the ancient superstitions regarding a primitive race of beings called Ragon, which are believed to live beneath the sea, could be true. The creature enters Ishii's house, frightening the doctor's younger sister, Fumiko, before leaving. Jun notes that Ragon was momentarily drawn to the music from a transistor radio, which appeared to calm its hostile nature. Jun uses the radio to lure the creature to the edge of a cliff, where a sudden tremor causes it to lose its footing and fall to the rocks below. The escalating tremors indicate that Ishii's theories are true; but when the villagers try to leave the island, their path is blocked by a second Ragon, which surfaces in the harbor. The strange object turns out to be an egg, which hatches a baby Ragon. Furniko delivers the infant creature to its parent, who gently takes the baby and returns peacefully to the sea. Arriving in a helicopter, Ippei rescues Jun and Yuriko and the villagers flee the island in their fishing boats. Iwanejima is tom apart by a massive quake and vanishes beneath the waves, a frightening omen of what may one day happen to Japan. 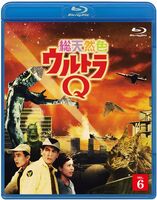