Yuriko and Ippei are passengers on the inaugural voyage of the Inazuma; a futuristic bullet train leaving New Tokyo Station for North Kyushu. Mistaking it for Yuriko's case, Ippei accidentally brings along the high-pressure container which houses Dr. Aikawa's artificial lifeform, M1. The lifeform, which primarily exists in a jelly-like state, becomes active when carelessly exposed to a photographer's flashbulb. While stowed in the Inazuma's engine room, rapid cell division occurs, evolving M1 into a gorilla-like being. M1 frightens the crew and playfully toys with the equipment in the abandoned engine room, damaging the train's electronic brain. With the Inazuma speeding out of control, the conductor separates the passenger car from the engine, leaving M1 inside the engine room. However, a young stowaway named Itachi is also trapped with the panicky M1 in the engine car, now speeding toward destruction. At the last terminal, the Inazuma's maiden voyage ends in fiery disaster; Itachi and M1, however, having hidden in a storage locker, are safely launched into orbit! 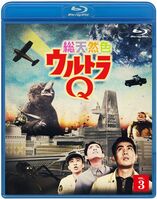