Ultraman: The Ultimate Hero episode 4 "The Dark Past"

None
The Sun People (太陽の民 Taiyō no min) were a prehistoric race that appeared in Ultraman: The Ultimate Hero.

The Sun People were a race that either preceded mankind or were group that split from the original that went underground after a great catclysm/disaster. Saved by an Ultra, they were told to await the day that the light returned to the surface. However while the Ultra spoke of the sun in the sky, the underground people took this to mean the Ultra himself and spent the next untold millennia, waiting in the earth, worshipping him as a god and awaiting his return. When Ultraman did return, the underground people made their move and set loose their monster Telesdon, causing several earthquakes and attracting the attention of WINR. That is when they kidnapped Kenichi Kai AKA Ultraman Powered, the very host of the being of light they worshiped, took Kenichi Kai's Beta Capsule and unleashed their monster on the city, seeking to retake ther surface from humanity. Holding Kai behind a forcefield, Kai argued at the senslessnees of their mission, hearing their story, he noted that the sun had been shining for as long as mankind has walked on the surface. The Sun people insinuated that the light referred to the Ultra and showed a statue of him, which lighted the crystal on the chest of the Ultra. When the sun people released Telesdon again, Kai noted that they could not release the light they spoke, only for the beta capsule to light up a single statue. One temperamental member of their race gave Kai back his Beta Capsule and demanded he show them. To their horror/surprise Kai transformed into Ultraman, but the light of the change was too much for them. What became of them is unknown but they are never heard again for the rest of the series. 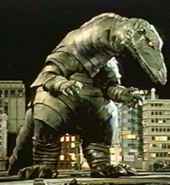