Ultraman F
The Giant (巨人 Kyojin), originally a person named Koji, was a human Kaiju who appeared in episode 22 of Ultra Q. After a bizarre encounter with a species of giant Morpho butterfly, Koji rapidly grew into The Giant after being exposed to the scales given off by the butterflies' wings.

Residents are horrified when reports of gargantuan skeletal remains and giant footprints lead them to believe that an abominable snowman may be lurking in the nearby mountains. When the press is alerted, Yuriko is visited by her friend, Ayako, who relates a desperate story.

While helping her fiance, an entomologist named Koji (浩二 Kōji), collect insect specimens, they discovered a large species of Morpho butterfly that was thought to be native only to the Amazon. When the strange insects expelled their poisonous pollen on Koji, he became ill and fled from Ayako as though he were insane. When she finally caught up with him, she was horrified to find him rapidly increasing in size.

Aided by Dr Ichinotani, the investigative trio pursued the trail of the lost Koji. When sighted, Koji has grown to a monstrous height and appeared to have lost his human identity. The frightened masses viewed him as a monster and the military was called upon to stop him. Ayako desperately reaches out to Koji, trying to revive any memories that he may still have of her. Dr. Ichinotani employs the Thermal Atomic X Ray, a concentrated atomic heat ray designed to counter the effect of the Morpho poison, and before Koji can harm Ayako, he is driven back into the forest. Following his trail, Jun and the others find that he has been restored to normal size and is happy to be reunited with Ayako. 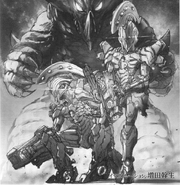 Through the research on Butterfly Morpho's pollen, Inpei managed to turn his giants into 40 m tall instead of 20 m. Because the growth turn his subjects animalistic, Inpei control them by sending radio waves to their brain, something that is considered as an inhumane act. Another fatal effect is how they can only return to normal via Thermal Atomic X Ray, with three radiation is enough to kill them due to development of cancerous cells, completely making the project inhumane.

Each Giant Soldiers are capable of fighting barehanded, able to defeat a cyborg Jirahs (which is also Inpei's creation) but lacks a determination power. This was compensated by Ide through the creation of Ultra Armor but they still lacked the necessity for aerial combat, forcing the SSSP to aid them as well. For the giants, Inpei controls their movements while Ide controls their armor (shielding, guns and turrets) before they synchronize their controls to reduce risks of contradiction in maneuvering.

By the time the Ultra Armor was completed, Beast the One appeared and terrorize in the city. Inpei decided to release his Giant Soldiers on the battle as test subjects. The Giant Soldiers fought Beast the One with multiple gunfires before destroying it with Mars 133. To prevent the Beast cells from spreading (and create more Space Beast), they generated forcefield around the monster and contain themselves. Despite miraculously survive but the explosion cause them to run amok across Tokyo until Akiko Fuji turned giant and contains them long enough for Dr. Ichinotani to shrink all of them via Thermal Atomic X Ray. Because of Inpei's inhumane procedure, the Giant Soldier project were shut down by United Nations. 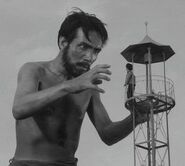