The Businessman Who Came From the Sky

The Businessman Who Came From the Sky (宇宙（そら）から来たビジネスマン Sora kara Kita Bijinesuman) is the 3rd episode of Neo Ultra Q.

There is an advertisement for a new hair care product, done by an idol called Miki. Emiko tries to interview her, but her attitude is rather adverse. Later, when the idol goes into her room, she sees a rather alien reflection in the mirror on her face and smashes it. Hearing noise from her room, Emiko and Shohie rush in, to find it wrecked. In the room, Emiko picks up a business card, from the Vulcanus Alien.

Emiko, the doctor, and Shohie go to the place mentioned on the card. He tells her not to ask him questions, and that he will return to his planet after finishing his "very productive" business—which was the only reason he came to earth. Then he pulls back a curtain and reveals the frozen women, saying he will bring them to his planet, and reveals a contract she signed.

He reveals he saw Miki about to commit suicide, and that she believed her life was horrible because she thought she was ugly. He had transformed her to how she wanted to look in exchange for something. He says she is beautiful, and he will take her back to his planet. He is a merchant who sells valuable things of beauty.

Emiko says there is nothing wrong with wanting beauty, but she can't allow the alien to manipulate women's feelings, and that she won't let the alien take the ladies away. He says that if she stops him, she will be a thief and a contract breaker, and that humans can't be sold like objects. He says that to the Vulcans, humans are just like dogs, cats, or pigs. Off course this is ignoring the fact humans are conscious of the passing of time and have both an intellect and will, while animal's don't. The alien doesn't seem to have anything the humans don't other than superior tech.

Emiko tells him she will bring him something more beautiful, and when she does, he will let the girls go. He agrees, and gives her a device which can measure beauty, telling her that his race has different ideas of beauty than humans. The professor tests it, and discovers it seems to measure negative human energy. They work on a way to replicate it. They find a man with lots of the energy, and track him.

He begs his girlfriend for money, when Emiko uses the device the professor rigged up. The energy shoots out of him. Seeing how bad he is, he starts trying to kill himself. Shohie gives back some of the liquid-y negative energy. The two of them run out of the restaurant after that brief embarrassing event.

The Vulcanus Alien is angry when they return empty handed, and refuses to do business with them. Jin comes to the rescue and makes a deal with the alien: a new device to gather the energy his kind finds useful without using humans. He reveals a device that gathers all the negativity from particles in timespace, however that works. They gather a huge vat of the energy and the Vulcan is delighted.He says when he leaves earth Miki will return to how she looked before.

The next day, Emiko hears the Vulcanus' voice in her head, telling her Miki chose to leave with him. In the woods, Miki tells him she is certain of her choice, and that she does not want to go back to how she was before. He tells her Vulcanus is no different, but she is adamant, and they depart. 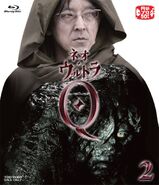 Blu-Ray Release
Add a photo to this gallery
Retrieved from "https://ultra.fandom.com/wiki/The_Businessman_Who_Came_From_the_Sky?oldid=451463"
Community content is available under CC-BY-SA unless otherwise noted.