The 6 Ultra Brothers vs. The Monster Army (ウルトラ6兄弟VS怪獣軍団 Urutora Roku Kyōdai tai Kaijū Gundan), known in Thailand as Hanuman vs. 7 Ultraman (หนุมาน พบ 7 ยอดมนุษย์ Hanuman pob Jed Yodmanud), is a tokusatsu Science-Fiction/kaiju/superhero film produced in 1974 by Tsuburaya Productions of Japan and Chaiyo Productions of Thailand. It was released theatrically in Japan on March 17, 1979.

In 1984, the film was reissued in Thailand in an edited form, known as Hanuman vs. 11 Ultraman (หนุมาน พบ 11 ยอดมนุษย์ Hanuman pob Sibed Yodmanud), which contained the unauthorized use of footage from the compilation film Ultraman ZOFFY, and was later edited into the also unauthorized English language film, Space Warriors 2000.

Due to the many legal issues faced by Tsuburaya Productions because of Chaiyo, the company has, at least unofficially, disowned this movie.

This film has the 6 Ultra Brothers, Zoffy, Ultraman, Ultraseven, Ultraman Jack, Ultraman Ace and Ultraman Taro, teaming up with the Hindu monkey-god Hanuman, who was merged by Mother of Ultra with a young Thai boy who was cruelly murdered by a group of robbers, to fight five evil monsters. They are Gomora (from Ultraman), Dustpan (originally from Mirrorman), Astromons, Tyrant and Dorobon (all from Ultraman Taro), which were accidentally awakened by a rocket test gone terribly wrong.

This film, along with Jumborg Ace & Giant, marked the only time Tsuburaya Productions and Chaiyo Productions officially worked together. Decades after this film was made, relations between the two companies have deteriorated, leading to the court battle over rights to the Ultraman characters (specifically the ones depicted in this film) and even Jumborg Ace, which was eventually won by Tsuburaya in 2008.

The film was released in Chinese markets as 猴王大戰七超人 (Hóu wáng dàzhàn qī chāorén, 猴王大戰七超人), under the international English title Hanuman and the Seven Ultramen. It was released theatrically in Hong Kong on February 26, 1975, and in Taiwan on June 27 of that same year. It was also reissued in Taiwan on January 25, 1985.

The shorter Chinese version (originally distributed by Hong Kong's Shaw Brothers Studio) is speculated to have been based on a pre-edited export cut of the film, as glue marks appear on the uncut film specific to where edits are made in the Chinese version. The Taiwanese version by extension is counted as an official version of the film. 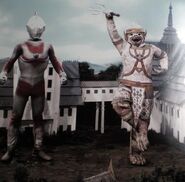 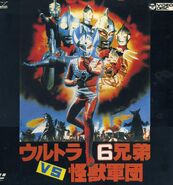 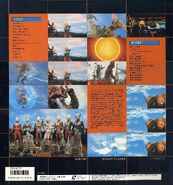 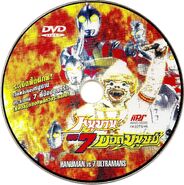 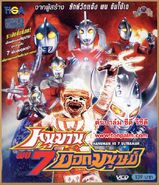