April, 1975
The・Ultraman (ザ・ウルトラマン Za Urutoraman) is a manga series written and illustrated by Mamoru Uchiyama. The first chapter, often called the Jackal Arc (ジャッカル編 Jakkaru-hen), was seralized in Japanese magazine Third Grade (小学三年生 Shōgaku San Nensei) from April 1975 to March 1976 under the name "Goodbye Ultra Brothers" (さよならウルトラ兄弟 Sayonara Urutora Kyōdai). Three years later, in 1978, it was reprinted and then continued in CoroCoro Comic under the name "The・Ultraman", where it gained more notoriety.[1]

The manga has been collected in multiple sets of anthology volumes, including an English translation called Ultraman Classic: Battle of the Ultra-Brothers. An animated short based off of the Jackal Arc titled The・Ultraman: Jackal vs. Ultraman was created for the 2015 Japan Animator Expo.

Continuing from either one of Uchiyama's Ultraman Leo manga series, the story centers around Zoffy, Melos and the Ultra Brothers taking on numerous Kaiju threats to both the Land of Light (known as the Land of Ultra in the manga) and Planet Earth.

Jackal vs. The Ultra Brothers

The story begins with a mysterious evil picking off Ultra Brothers while they're alone, killing them. Zoffy grows more and more desperate to save his brothers, deploying greater safety measures and sending out soldiers to try and track down and destroy this evil, but is unable to prevent Ultraman, Jack, Taro, and Ace from being killed, seemingly by their greatest foes (Zetton, Black King, Birdon, and Ace Killer, respectively). At Ace's death, Zoffy declares that no one should be out alone, and Leo remembers his brother Astra is alone on another planet. Leo, Zoffy, and a small team travel at once to find Astra, but find him dead at the feet of an imposter posing as Zoffy. The imposter laughs and announces he was all of the monsters seen before, revealing that he can shapeshift freely and take on all the abilities of whatever form he takes. When Zoffy demands to see his true face, the imposter obliges, and changes form into Demon King Jackal, who Zoffy recognizes. He recalls that Jackal once tried to conquer the galaxy, and was only prevented from destroying the Land of Ultra by Ultraman King defeating him and trapping him in a black hole. Jackal announces he has absorbed the power of the black hole that had imprisoned him, and that he still thirsts for conquest, and for revenge on the Land of Ultra for his humiliating defeat. Zoffy and his team attack Jackal, but Jackal shapeshifts rapidly between various powerful forms and deals Leo a fatal blow, forcing Zoffy and the others to retreat to try and save his life. Once they return to Planet Ultra, Jackal laughs at Leo's plight, having disguised himself as an Ultra Warrior to sneak onto the Land of Light to better destroy it and King. Once King sees Jackal's true form, he sends soldiers to defend the Plasma Spark, but is unable to defeat Jackal. Father of Ultra sends Zoffy out to protect the Ultra Key and his wife, Mother of Ultra, and while Zoffy protests that he can help fight Jackal, Father of Ultra tells him that if Jackal gets the Ultra Key, he will be truly unstoppable. Zoffy flees with Mother of Ultra, and see a massive explosion on the surface of the planet. They return to find Jackal gone, and they can find only twenty-six survivors aside from themselves. Zoffy swears to avenge the fallen Ultra Warriors.

Zoffy and the 26 Ultra Warriors hide across Japan in human guise, with Jackal having learned of their survival and trying to force them out of hiding. To this end, they have enslaved all of Japan to track them down. Jackal's soldiers eventually capture one of Zoffy's soldiers and threaten to kill him if Zoffy doesn't reveal himself. Failing to draw out the Ultras, the soldiers begin crushing to death not only the disguised Ultra Warrior, but dozens of humans. Zoffy, though anguished over the decision, feels he can only stand by and wait it out, but the situation is saved when a masked, cloaked figure appears and trounces Jackal's soldiers with terrifying ease and aplomb, despite being outnumbered twenty to one. The figure disappears, and Zoffy is left to wonder who the masked warrior could have been. Zoffy's men heatedly protest sitting around doing nothing, saying thanks to the masked figure they have an opportunity to go on the offensive, but Zoffy hears an explosion from outside their hiding place. Going outside, he sees that Jackal's forces are attacking Tokyo, killing multiple humans in their wake. The masked figure appears again, and Zoffy at last agrees to rally the 28 Ultra Warriors to join him. Jackal's general demands to know who the masked figure is, and in response the figure literally explodes out of his armor for the sake of making a dramatic entrance, announcing himself as the Commander of the Andromeda Nebula Branch of the Inter Galactic Defense Force: Melos! It is at this moment the 28 Ultra Warriors make their appearance, and Zoffy and Melos instantly recognize one another. They fight together against Jackal's general and army, and despite the general being willing to sacrifice his own men to destroy his enemies, Melos is able to destroy him and the army retreats. Zoffy asks Melos to join them, but Melos flatly refuses, announcing that he couldn't fight alongside those who run and hide in fear. Melos then goes after Jackal by himself, encountering one of Jackal's spaceship bearing two of his top commanders. Jackal's ship hits Melos with a Destructo Cannon--a weapon with a beam that can kill an Ultra in a single blow. Thanks to Melos's armor, he barely survives, and Zoffy and the 28 Ultra Warriors come to his aid, two being killed by the beam and one taking a blade meant for Melos. With his dying breath, the Ultra begs Melos to fight alongside Zoffy, and Melos curses himself for having caused the Ultra's death. Two more Ultras die, and Zoffy manages to take control of one of the Destructo Cannons and use it on the ship, destroying it and Jackal's minions inside. After the fight, Zoffy berates Melos, telling him five lives were lost because of his ego. Ashamed, Melos offers to fight alongside them to honor their sacrifice, and together they attack Planet Jackal. Breaking into the throne room, both Zoffy and Melos see a massive statue of Jackal, though neither can tell that Jackal is observing them from inside through the statue's eyehole. The door to the throneroom slams shut, and Zoffy realizes they've both walked into a trap.

The floor breaks from underneath them, and Zoffy and the other Ultra Warriors are buried alive, thanks to Jackal's black hole power sucking them in. Melos fights Jackal one-on-one, and, believing he's found Jackal's weak spot in his horns, slices one off. Jackal falls to his knees, begging Melos to spare his life, but is only waiting for a chance to strike. Meanwhile Zoffy is restored to life by a disembodied blue light surrounding him, and instructed to help Melos beat Jackal. Jackal, by this time, realizes that Melos's armor is deactivated by a button on his wristband and, when Melos turns his back in disgust, he leaps forward, breaks Melos's arm, and presses the button, taking away the only protection Melos had against the power of the black hole. Jackal gloats over his limp figure before leaving, just as Zoffy manages to crawl out of the crushing gravity pit and make his way to Melos's side. As Jackal preens outside, announcing to his army that the Ultra Warriors are no more and that he plans to take the Land of Ultra as his new headquarters, he hears defiant words from somewhere in his army. Demanding to know who dares to mock him in his hour of triumph, he sees Melos's armored form in front of him, laughing at him. Infuriated, Jackal orders his army to destroy Melos, but the armored figure strikes back with surprising strength. Jackal charges his destructo beam, but before he can fire, "Melos" fires the M87 Beam, and the two opposing beams almost kill both figures, and completely blows the armor off of "Melos," who turns out to be Zoffy wearing his armor. Zoffy, mocking Jackal, reveals that every Ultra he'd killed has now been revived, and to demonstrate, the once-dead Ultra Brothers appear and simultaneously attack him all at once, destroying him utterly. Zoffy announces that the Demon King is no more, and offers to spare Jackal's entire army if they agree to retreat now. They all agree, but vow to have revenge. Zoffy isn't particularly worried by this, saying they're worthless without their leader. It is revealed that, not only did Melos survive, but the Land of Ultra is being rebuilt by King, who earlier appeared to Zoffy to revive him in the form of blue light.

The Challenge of Young Fightas

Desparate to duel Ultraseven, Fightas, who is later revealed to be Melos's younger brother, teams up with the remnants of the Jackal Army to force him to fight.

The Ultra Brothers take on an invasion from Alien Pirates.

The Great Operation on the Moon ―― Versus Vadar

When the Ultras detect a fleet of Vadarian ships heading for the Land of Ultra, they work with humanity to build a fortress on Earth's moon to ambush them before they can arrive.

Friendship is Forever... ―― Taro and Elf

The Ultra Brothers battle Alien Assassin, who is on a mission to assassinate Zoffy.

Ultraman Classic: Battle of the Ultra-Brothers

In 1994, Viz Comics published an English translation called "Ultraman Classic: Battle of the Ultra-Brothers". These volumes do not include chapters "Friendship is Forever..." and "1 Dozen Special Attack Units", and "Fight! Ultra Brothers" was placed after "The Great Operation on the Moon". Chapter 1 and Chapter 4 are also split into more parts than in the original.

In 1998, the series was republished by Futabasha as three volumes. The selection of chapters is in a different order, but is the same as the Ladybug Comics release with a single new chapter, Uchiyama's Ultraman Tiga manga.

In 2022, two volumes titled The・Ultraman Tankōbon First Recording & Masterpiece Selection (ザ・ウルトラマン 単行本初収録&傑作選 Za Urutoraman Tankōbon Shoshūroku & Kessaku-sen) were released. This release includes The・Ultraman alongside various other Ultraman manga chapters created by Mamoru Uchiyama that hadn't been rereleased since their original publication, such as the entirety of his Ultraman Taro manga that was published in Fifth Grade magazine.[4]

Ultraman Classic: Battle of the Ultra-Brothers 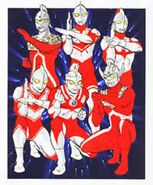 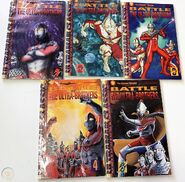