The☆Ultraman is the 8th entry in the Ultraman Series

The☆Ultraman (ザ☆ウルトラマン Za Urutoraman) is the 8th entry in the Ultraman Series, aired four years after the end of Ultraman Leo. For the first time in the series, the show was presented as an anime instead of a tokusatsu show, with the production company Nippon Sunrise (now known simply as Sunrise), known for their now-iconic mecha series Mobile Suit Gundam, handling the animation.

In the 21st century, various mysterious events occur on Earth, causing monsters to appear all of a sudden. EGG3 officer Choichiro Hikari was scouted to join the Science Guard Party on Earth but while on his way back, he was bonded to Ultraman Joneus, an Ultra Person of U40 who was sent by his brethren to fight against the monster threats and alien invasions. This allows the youth to become an Ultraman against countless enemies while keeping his identity a secret from his fellow members.

Sasaki, who was in charge of the song, made it the most difficult song he had ever sung.

In the 15th episode of the next series "Ultraman 80", Emi Johno was used in the scene of singing lullaby to the monster Myu and in 44 the instrument was used in the scene where 80 and the Delusion Ultraseven fight. In addition, the "popular monster large parade" of "5 Nights Series Super TV" (March 26-30, 1984, "Ultraman Taro", "Mirrorman", "Fireman", "Jumborg Ace" digest version. It is also used as an ending.

In the United States, on April 5, 1980, episode #14 of The☆Ultraman aired on U.S. national television when New York superstation WOR-TV Channel 9 (now WWOR) aired it as the first part of "Japan Tonight!", a special seven hour block of programming from TBS (Tokyo Broadcasting System), hosted by actor Telly Savalas. Japanese actress/author/talk show host Tetsuko Kuroyanagi introduced the episode surrounded by assorted Ultraman toys and merchandise while explaining to the American audience just who Ultraman is ("It's very, very popular in Japan - He's like your Superman."). The episode was dubbed into English by William Ross (Frontier Enterprises) in Japan and was sponsored by Bandai America.

The opening narration: "In a galaxy, which is millions of light-years away from us, the rulers of the star Ultra decided to send one of their men to Earth so that he could protect the people from the many space monsters that had suddenly started to appear at frequent intervals.  But they could not very well send in Ultraman, as everyone would notice him because of his strange appearance.  They therefore decided to use the vast resources of the star Ultra to implant the spirit of an Ultraman in the body of a young Space Force Trooper named Matt Gordon.  In times of danger, Trooper Gordon can call upon these amazing Ultra powers and transform himself into Ultraman and still be able to keep his identity a secret from everyone else on Earth."

There has also been two feature-length movie compilations released for home video: 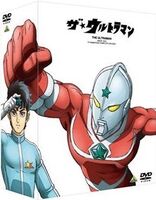 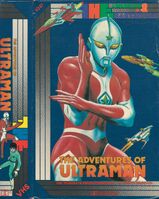