None
Terranoid (テラノイド Teranoido) is a man-made Ultraman that appeared in the series Ultraman Dyna. He appeared in episode 49. He was later corrupted by Spheres and morphed into Zeluganoid[1] (ゼルガノイド Zeruganoido).

TPC staff Gondo Kihachi decided to restart the frozen Project F, which was to create a man-made Ultra from the remains of Tiga's companions. He then commanded the Black Buster Corps to capture Shin Asuka and bring him to Mars after discovering his secret identity. However, Ryo had followed Asuka and was also held hostage just as Superior Iruma (former GUTS captain) and Captain Hibiki finds out about the crime. Asuka was then placed into a "life-force extracting device" to extract his light energy and place it into Terranoid's statue. Once his energy was spent, Asuka collapsed and Terranoid was brought to life.

As soon as Terranoid awakened, Sphere attacked the TPC Mars Base and Terranoid was called into action. Terranoid then displayed the Terranoid Beam Slicer and Solgent Beam and soon destroyed most of the spheres. Unfortunately, due to his careless spending of energy, his Color Timer soon began to blink and there were still more Spheres left, Terranoid was hit and he soon fell. Due to him running out of energy, Terranoid couldn't stand longer, so the Spheres morphed him into his next form, Zeluganoid and attacked the TPC Mars Base.

Zeluganoid then began to wreak havoc upon his creators. Asuka, almost killing himself in the process, transformed into Dyna to fight the monster, but due to his previous drain of light energy, his Color Timer quickly flashed. Just then, Super GUTS arrived and also attacked the beast. Watching the battle from underground is Ryo and Gondo himself. Ryo then headed towards the "life-force extracting device" to lock herself in and sacrifice her energy so Asuka can live when he un-transforms. Seeing this as an opportunity to redeem himself from his mistake, Gondo throw Ryo aside from the device and locked himself in. He then switched the machine on to max frequency and turned it on. Gondo bids farewell to Ryo and performs Asuka's signature thumb up.

In a flash of yellow light, the machine exploded, and Gondo became energy, which was then transferred into Dyna. With renewed strength, Dyna changed into Strong Type and threw Zeluganoid all the way to the other side of the battlefield. Dyna then changed back into Flash Type and attacked Zeluganoid with his Solgent Beam. However, Zeluganoid was undeterred and began to walk toward the giant of light. Once again, Dyna unleashed his Solgent Beam and began to assault the beast's Color Timer. Soon, Zeluganoid exploded, and the base was safe. However, Ultraman Dyna also then vanished with Zeluganoid after the battle.

Terranoid was released in the 2000 Ultra Hero Series as an EX figure that was made from red vinyl with dark silver and fold sprays. The figure sports 3 points of articulations and is 6.45 inches tall.

Terranoid posing with his tag

Zeluganoid was also released, but as an Ultra Monster Series figure. The figure is made from a grey vinyl with multi-color sprays in the 1998 and 2000 versions, but was changed to only having silver, gold, and red sprays in the 2012 EX version. The figure sports 3 points of articulation (both Terranoid and Zeluganoid: arms, waist), but the 2012 version has a glue-sealed waist. Zeluganoid is 6 inches tall. 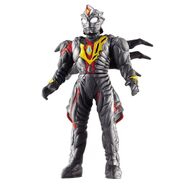 Terranoid running out of energy

Terranoid fell after hit by Spheres

Zeluganoid ambushed by a small squadron of GUTS Shadow (materializing) 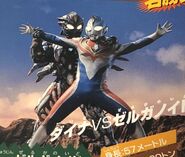 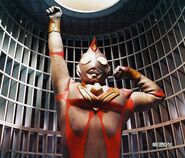