TBA
Terrano (テラノ Terrano) is a Pteranodon and one of the Dinosaur Army's high flying rulers of the sky from episode 2 of Dinosaur Great War Izenborg.

After the defeat of Gorgo, Ururu in a fit of rage, sent one of his most ruthless fighters, the terror of the skies, Terrano. Terrano, unlike Gorgo, didn't make his presence known outfront. He hid inside a massive cave, slowly building up an army of giant bats to join him on his agenda to destroy the humans. After two cave spelunkers disturbed the flesh eating bats and Terarno, the beast took flight and lead his army of flying mammals into the sky. Ururu informed Terrano about a conference meeting between AI, the Professor, JSDF and government officials, so the saurians decided to crash the party. Terrano has his army of bats attack a radio tower and a power generator that knocks out the lights in the building where the meeting was taking place at. The rest of the crew back at their headquarters hears about the mind-controlled bats and they go off to pick up Ai from the building. However, the building gets attacked by the mind-controlled bats, so the D-Sentai use bombs to scare them off. Afterwards, Terrano appears and attacks Izen-Go, making them land. Terrano than starts attacking the building with it’s beak to destroy the staircases so the conference room is isolated. Zen suggest to Ippei and Barra that they split Izen-Go to attract Terrano’s attention away from the building. However, Terrano was able to knock out the vehicles with little effort. Terrano flies around the building and starts to set it on fire. When D-Sentai manages to get their vehicles back into action, Ippei and Barra use Izen-II to distract Terrano once again while Zen heads to the building to pick up Ai. Once the two siblings reunite, they merge into Izen-Man and Izen-I transforms into Izenborg-Go. Izen-Man faces off against Terrano while Ippei and Barra put out the flames on the building. They fight each other, Izen-Man uses Wing Cutter to cut Terrano’s wing membranes, making the pterodactyl spin around in the same place. Finally, Izen-Man uses Izenborg-Go’s drill to go through Terrano’s body, making the pterodactyl explode in the sky. Upon Terrano’s demise, the bats return to normal. 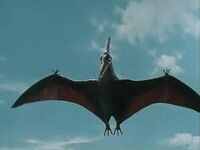 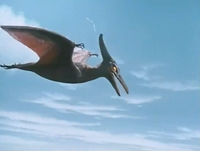 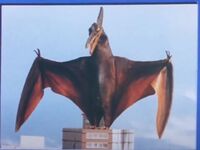 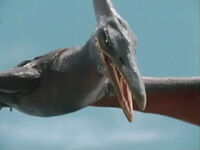 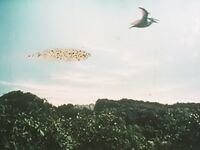 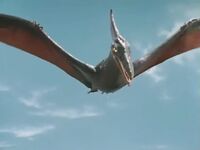 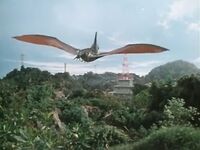 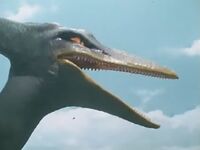 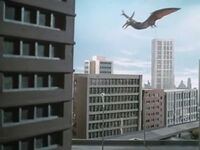 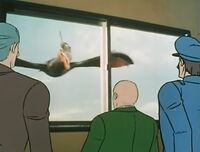