"This is an underground monster Terragaia. This monster sneaks into silicon, reassembles the system and to create the terror liquid. From its horns emit a destructive beam, and spews out chlorine gas."

None
Terragaia (テラガイヤー Teragaiyā) is a Hercules beetle/dinosaur-like Kaiju that appeared in episode 10 of Gridman the Hyper Agent. It was adapted in Superhuman Samurai Syber-Squad as Nixtor.

Angered by the foul taste of the water dispenser at his town's park, Takeshi Todo had Terragaia go into a city water plant to turn the water supply into hydrochloric acid. With its gas, Terragaia could melt circuit panels and burrow underground in the computer world. While Yuka Inoue was analyzing a sample of the tainted water, Gridman alerted the gang about Terragaia. However, Gridman walked into a trap when he entered the plant's computers. His ankles were shackled and was being asphyxiated by Terragaia's gas. Luckily, Ippei had finished designing Thunder Jet and Twin Driller; using the new mecha, Twin Driller broke the shackles and Thunder Jet used the Thunder Ring to muzzle Terragaia. Unable to spray its gas, Terragaia was destroyed by Gridman's Grid Beam. 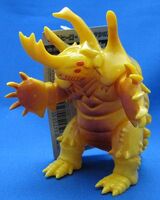 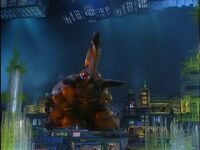