Mirrorman episode 41 "Mystery From Another Dimension"

One day Yuki rode a bus that was carrying a garrison of Invaders. She passed out from the sheer shock and Kyotaro witnessed the bus teleport into the Fourth Dimension. Shortly after SGM found out, the Invaders began to jam radars of the Self Defense Force as one of their space ships approached Japan. After that Kyotaro spotted a female Invader and gave chase. After he failed Kyotaro was contacted by the Invaders via telephone booth who proclaim they have already begun immigrating to Earth. A squad of seven Invaders surrounded the phone as the one talking to Kyotaro stated they wanted the Earth for how beautiful it was and intend to seize it before it became too polluted. The Invaders briefly showed a hologram of Yuki floating in the air to use for bargaining. After Kyotaro went with the Invaders, Murakiami had the SGM launch in Jumbo Phoenix to spy on Kyotaro. Kyotaro was then transported to the fourth dimension by the female Invader after an X Transmitter was found on him. Five hours later the Jumbo Phoenix landed near an abandoned car, Murakami and Fujimoto investigated while Yasuda was on standby. Before they could get close the Invaders blew it up with a bomb.

As the SGM wondered if Kyotaro was dead, the hero was being closely watched at an apartment as the Invaders now no longer needed sunglasses to hide their eyes. After Yuki's life was threatened over the phone again, Kyotaro went berserk and fought the nearby enemies. The female Invader quickly turned into her true form, the monster Teroringa. Kyotaro used a shattered picture frame to transform into Mirrorman to fight Teroringa. The hero got in close to use karate chops on the insect monster's head followed by throwing her. Jumbo Phoenix arrived and divided into three fighters to help Mirrorman only to miss every shot. Teroringa then teleported to the fourth dimension where Yuki was still passed out on the bus. She summoned her minions to deal with her before she returnd to the fight, sneaking up behind Mirrorman. The SGM fired again, once more missing their target. Teroringa teleported again, but this time the hero's reaction time allowed him to get the jump on her, assaulting her with chops and kicks. The Mirror Knife was used to decapitate her before Teroringa teleported again. Using the Mirror Eyes Mirrorman found her and destroyed Teroringa with the Silver Cross. Shortly after her destruction the SGM destroyed the immigrant space ship, finally ending their plan. 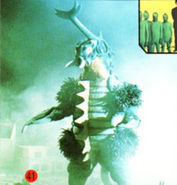