Terochilus (テロチルス Terochirusu) was a Kaiju that appeared in episodes 16 and 17 of Return of Ultraman.

A mysterious ancient flying Kaiju from the Cretaceous period, Terochilus first appeared flying over a group of party going teens, knocking many into the water moments before the ship exploded from a bomb strapped to it. Later, the monster assaulted and destroyed a plane, attracting attention of MAT. They soon went searching for the avian kaiju, finding it flying over the city, spraying webs and cocooning a building. The air force soon attacked the monster but he simply knocked them out of the sky and fled, leaving MAT wondering why he targeted this building in particular.

Later that day, a toxic red gas began being released from the building, choking civilians, similar to a gas that had previously been used during an attempt on Go's life. Even stranger, it began to snow for no known reason! While going out to sea in search of the of Terochilus, Go found an island where a volcanic eruption was taking place, at the top discovering Terochilus in the caldera, spraying his webbing, which was actually the "snow" that had been coming down. They soon attacked his lair, but did nothing but enrage the bird kaiju. Terochilus took off to fight back, MAT’s weapons proving powerless.

Just then, Go became Ultraman Jack, who forced the bird down and attacked. Jack tried to throw him, but the monster took flight and slammed into him before picking him up and throwing him to the ground. The two entered a dogfight,neither having an upper hand until Jack was knocked to the ground and the monster tried to peck him with his beak. The fight continued, Jack throwing Terochilus into the air, only for him to fly off and continue their dogfight. Jack tried the Spacium Beam, hitting him twice in the shoulder, but Terochilus was unfazed and returned fire with energy bullets from his nose, sending Jack crashing into the sea defeated!

MAT made preparations to face the airborne kaiju, bringing a type of tank with them this time to first get rid of the webbing around the building but things were complicated by a criminal, who held them back using the same gas that had come out of the building, dragging a woman he'd kidnapped inside the webbed building. As night fell, Terochilus returned and the air force engaged it, but to no avail, as he just destroyed them again. The monster returned to the city, flying around the cocooned building before being attacked by the military. The creature hovered over the structure for some reason, ignoring the military. The bird-like Kaiju further cocooned the structure, though the reasons were yet unknown and the people inside prevented them from getting close. Terochilus remained their till sun up, when shots fired disturbed him. The massive bird began attacking the city as the kidnapper began throwing bombs at him after a change of heart, prompting Terochilus to begin attacking the building itself. Go found himself buried in rubble trying to save the girl, prompting Jack to take over for a rematch with Terochilus, quickly knocking the condor-like monster through a building. He was slammed through a building and then threw Terochilus twice, making sure to keep him grounded. But soon enough, Terochilius took to the sky and a dogfight started again, but this time Jack latched onto Terochilus and used his own speed to spin him around and throw the bird to the ground from high in the sky, killing him on impact. After which, the cannon was used to clear the webbing from the building.

Although not seen, Terochilus is seen in a animated flashback as part of the Monster Army lead by Alien Empera in episode 25.

Although not appearing on screen, Terochilus was mentioned in the Xio Profiling section of Ultraman X Blu-ray II and page 86 of Ultraman X Super Complete Works magazine.

Terochilus was actually one of the many monsters awakened as a result of the Ultra Flare. Future Xio captain Shotaro Kamiki and his daughter visited his bedridden wife at the hospital when he was forcefully called by the military to get into action. The air force fought against Terochilus in its rampaging spree and the monster accidentally disrupted the power lines that caused a temporary power outage in the hospital. This leads to the death of Shotaro's wife and puts a strain on his relationship with his daughter.

Figure of Terochilus, by Bullmark. 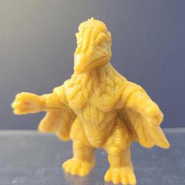 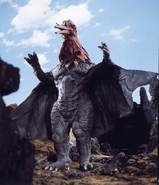 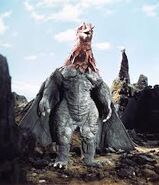 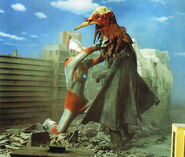