Ultraseven episode 41 "The Challenge from the Water"

Tepeto was a bio weapon created by the Alien Tepeto. The Tepeto seijin called out to their monster when the UG attacked the base. While Dan Moroboshi was stuck in chains he became Ultraseven! Tepeto and Ultraseven began to fight in the water. During the fight, Tepeto pretended to beg for mercy multiple times, each time causing Ultraseven to let his guard down; Tepeto would then blast him with his water cannon, or trip him and swim away. With his patience waning, Ultraseven decided enough was enough. The hero swiftly shot the deceitful monster with his Emerium Ray, then split Tepeto into two with the Eye Slugger. The Challenge from the Water 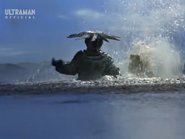 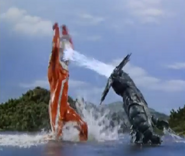 Figure of Tepeto by Marmit 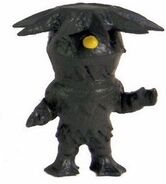 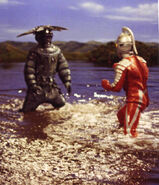 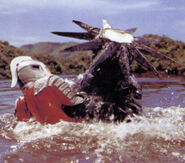