Ultraman Gaia episode 7 "The Cleansing of the Earth"

None
Tenkai (, Tenkailit. "Heaven") is the first of the three Nature Control Machines that appeared in the series, Ultraman Gaia. According to Gamu Takayama, Tenkai's purpose was to cleanse the atmosphere, being the first step of Earth's repopulation.

Created by unknown beings, Tenkai, along with Enzan and Shinryoku were made to cleanse the Earth and repopulate the planet with new specimens when one species "overevolves". Tenkai was the first of the three to be activated, unleashing a tornado and slowly sweeping towards Japan. However, one of its pieces flew into a building and was examined by XIG, thus revealing its existence. Tenkai was then assaulted by Team Lightning and hurried to Japan's shores and attached itself to its base, and began ramming at the fighters repeatively. Ultraman Gaia soon appeared and the two clashed. Unfortunately, Gaia could not hold on to Tenkai for very long due to its rotation, and soon Tenkai began to hammer Gaia with tornadoes and hurricane. The hero seemingly disappeared, but not for long. As Tenkai rose up, Gaia burst through the ground and drilled a hole in the center of Tenkai's body, emerging through the top with Tenkai's main control system. Gaia threw the core back at Tenkai, which then exploded. The Cleansing of the Earth 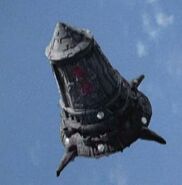 Tenkai blasts off after being fitted with a base